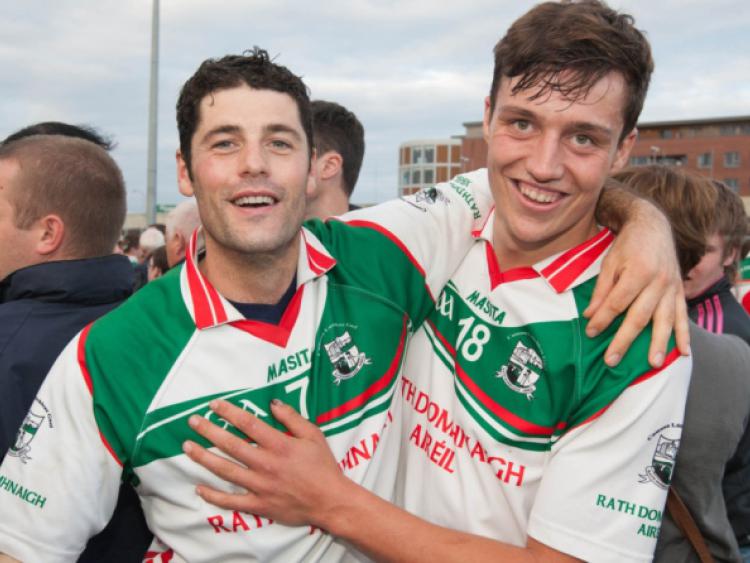 As Alan Delaney made his way up the steps of O’Moore Park for the fifth time in nine years, this one was a little bit different.

As Alan Delaney made his way up the steps of O’Moore Park for the fifth time in nine years, this one was a little bit different.

This time, he was leading up his team mates, having captained the team to victory, one of the most comprehensive seen in a senior final for some time.

As he reflected on the occasion afterwards, he admitted that the honour of being captain had given this success a different dynamic. “It’s unbelievable. It’s already an unbelievable feeling to win a county final, but there is an extra bit of a buzz when you are captain and you get to lift the cup.”

He got to lift the cup because of an impressive team performance, as they dominated both ends of the field. While Mark Kavanagh and Ross King were running up big scores at one end, the defence was keeping Camross at bay at the other.

Last year’s champions scored just 0-10, and denying them a goal was something which really pleased the team captain. “We started strong but we conceded a few scores well, but when they scored we were able to hit back.

One of those aforementioned scoring duo, Mark Kavanagh, really enjoyed his first taste of a county final, scoring 1-5 from play, and Delaney was keen to pay tribute to the younger members of the panel. “It’s no surprise to us the way he’s able to hurl, and we know he’s capable of that, and to get him to do it on the day like he did today was brilliant.

“And Fonzy (Liam O’Connell) as well, in his first county final was brilliant, they were both brilliant for us.”

Ross King’s haul of 0-10, and terrorizing of the Camross defence, also drew praise from Delaney. “Roddy can do that any day he wants to. A lot of our lads are moving on a bit, but when the younger lads are able to come in and do that, it gives everyone a lift.”

Another player to catch the eye was Man fo the MAtch Paddy Purcell, who has been in sparkling form this year. After being called up to Cheddar Plunkett’s Laois senior panel, Delaney feels it has driven him to another level. “Paddy got great experience in with the county there this year and it stood to him, you could see it in him there today, he was a tower in the middle of the field.”

It is on to a campaign in Leinster now, and while Rathdowney-Errill are keen to push on, Delaney joked that they will take time to savour this victory first. “I think we have the Dublin champions away, but it’s not for a month or so. We’ll get through tonight and tomorrow and we’ll probably be training Wednesday or Thursday and we’ll see how we go.”