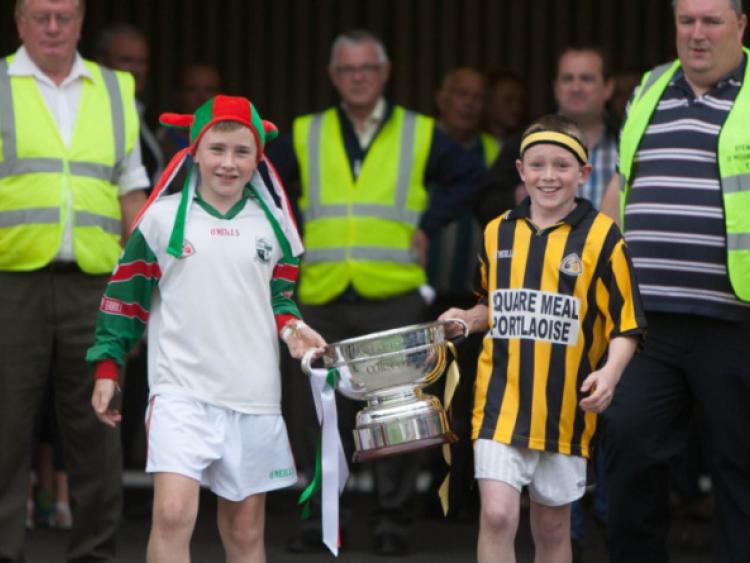 Rathdowney-Errill produced a stunning performance on Sunday evening to claim a fifth Laois SHC title in nine years with a 13 point victory over Camross in O’Moore Park.

Rathdowney-Errill produced a stunning performance on Sunday evening to claim a fifth Laois SHC title in nine years with a 13 point victory over Camross in O’Moore Park.

Leading by six points at half time, Rathdowney-Errill lmited Camross to just three points in the second half, as Ross King and Mark Kavanagh spearheaded their victory.

While King and Kavanagh combined for 1-15 between them, this win will be remembered for as complete a team performance as the Laois SHC has seen in recent memory.

Patrick Purcell was outstanding at midfield, Joe Fitzpatrick dominant at wing back and Liam O’Connell belying his years with an accomplished display at wing back.

While those few are probably lucky to be singled out, it really was an impressive all-around performance from the victors. They isolated Ross King at full-forward and kept playing long, diagonal balls up to him. Camross just couldn’t contain him, as his pace and touch caused havoc.

It is not often that Camross are out-worked on the field, but that’s exactly what Rathdowney-Errill did. They matched Camross’ famed work rate early on and then surpassed it, and were full value for their victory.

For Camross, this will be a tough defeat to take, as they will know they never came close to playing to their potential. Too many of their big players failed to fire, and they will just have to regroup and try to get back to this stage next year.

The game had a lively start, with Ross King and Zane Keenan trading points from placed balls in the opening four minutes. King then tagged on a point from play before Dean Delaney opened his account with a fine point from the left wing.

The opening stages remained, as Rathdowney-Errill briefly took a two point lead, only for Camross to get themselves back level at 0-5 each after 14 minutes thanks to Dean Delaney’s second point.

Rathdowney-Errill started to up the ante after that, and pressure from Ross King almost got them a goal midway through the half. They were building up to raising a green flag however, and after King tapped over a free, he then played his part in their goal.

A long ball forward from Joe Fitzpatrick broke kindly for King 30 yards out, and he advanced on goal before hammering a shot at goal from just inside the 21. Tadhg Doran produced a wonderful save to deny King, but the ball fell kindly for the in-rushing Mark Kavanagh, and he swept the ball to the net.

John Purcell added point a couple of minutes later as Rathdowney pulled five clear, and Camross got the point they desperatley needed when Joe Phelan fired over despite being under considerable pressure. Mark Kavanagh (2) and Enda Meagher pointed for Rathdowney-Errill, with Zane Keenan (free) only managing one in reply for Camross to leave the half-time score reading 1-10 to 0-7 to Rathdowney-Errill.

Camross needed to come out strongly at the start of the second half, but Rathdowney-Errill were more than ready for that, and Tadgh Dowling and Ross King (free) pushed their lead out to eight within a minute of the restart.

Ciaran Collier replied with an excellent point for Camross from long range, but there would be no halting Rathdowney-Errill. Ross King scored two more points from frees either side of a Matthew Collier effort to keep them in the ascendency.

The game then entered a somewhat bizarre ten minute spell when it seemed like neither side could score, as wide after wide rained in from both teams. Camross missed their chance to close the gap, and when the scoring finally resumed it was Mark Kavanagh who found the target with a nice point from 21 yards out.

Zane Keenan replied with a free in the 47th minute, but that would turn out to be Camross’ last score as Rathdowney-Errill kicked for home in closing stages of the game.

Ross King landed a long range point before adding a free four minutes later to stretch the lead out to ten points, and the by now the fat lady was getting ready to take to the stage. Mark Kavanagh pointed from 45 yards out before substitute Paddy Meehan scored one of the points of the game with a point from way out on the right wing.

That just left enough time for a couple of late substitutions and a point from James Ryan to put the seal on a comprehensive and fully-deserved 13 point victory.

After some well-deserved celebrations, Rathdowney-Errill will turn their attentions to Leinster Club Championship, where an away fixture against the Dublin champions awaits in November.