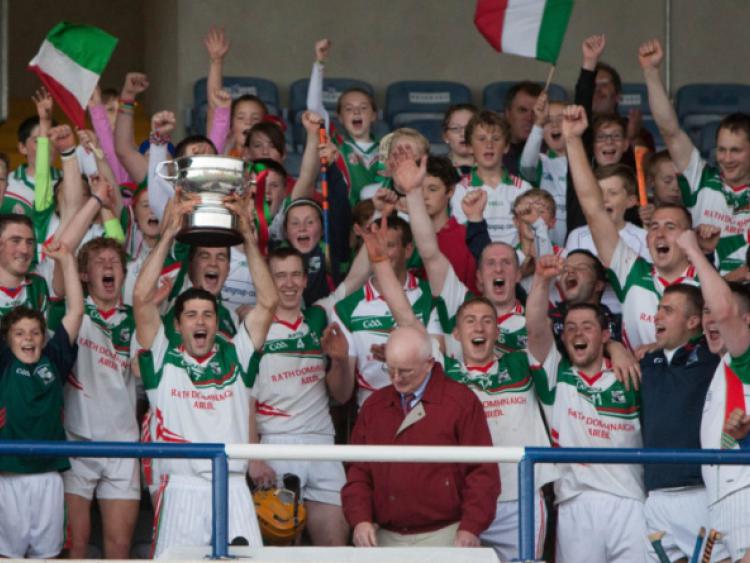 Rathdowney-Errill were toasting their fifth Laois SHC title in nine years after a landslide thirteen point win over Camross on Sunday.

Rathdowney-Errill were toasting their fifth Laois SHC title in nine years after a landslide thirteen point win over Camross on Sunday.

It maintains the remarkable run of no team retaining the Bob O’Keeffe Cup in over ten years, with Rathdowney-Errill themselves winning it every second year since 2006.

They were full value for the victory as well, pulling out to a six point lead at half time before outscoring Camross 0-10 to 0-3 in the second half.

Ross King and Mark Kavanagh caught the eye in their attack, combining for 1-15 between them, with Kavanagh’s tally of 1-5 all coming from play.

The win was masterminded by Rathdowney-Errill manager Conor Gleeson, and after the game he spoke of his delight at getting over the line. “It’s a fantastic win, but we’d have taken a point. We played well on the day, Camross are a better team than that but things didn’t go for them on the day, but sometimes that happens.

“We were going to be delighted whatever way we won, and we happened to win comprehensively today.”

Wing back Joe Fitzpatrick was also a happy man after the final whistle, and when asked where this win ranked out of the five titles the club have now won, he admitted this was right up there. “This is definitely up near the top, everyone that came in there today, they left nothing on the field, they gave everything they had.

“That’s a serious Camross team, we knew that it was going to be tough, and it was tough up to the end, but the boys worked unnatural hard on the hooks and the blocks, and that was the difference there today.”

Captain Alan Delaney also spoke after the game, and he felt that Rathdowney-Errill’s defensive resilience had been the key. “The main thing was we were able to keep out goals as well today, we conceded a few the last day which we got criticised for, and rightly so, but we were able to keep them out today, which was a big bonus.”

Rathdowney-Errill have time to enjoy their celebrations too, as they are not in Leinster club action until November 2. They face an away date with the Dublin champions, with the Dublin SHC only at the quarter-final stage so far.