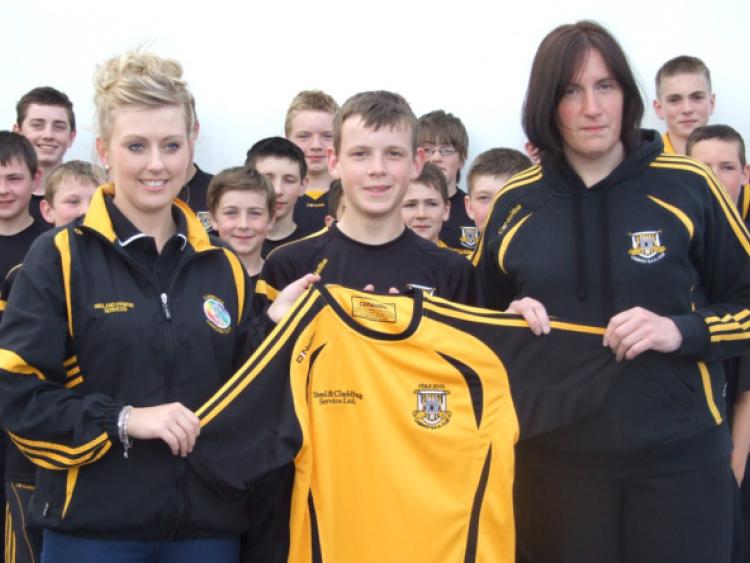 Camross camogie girls are preparing to head to Feile na nGael representing their county in Limerick this weekend.

Camross camogie girls are preparing to head to Feile na nGael representing their county in Limerick this weekend.

Camross earned their place to represent Laois earlier this year by beating O’Moore’s, St Fintan’s, Naomh Eamonn and The Harps in the Laois feile final. The black and amber girls were recently crowed U-14 county champions after a thrilling game against neighbours Naomh Eamonn. Camross Camogie Club has a long and successful history at Feile na nGael.

In the 1990’s Camross represented Laois seven times going to Tipperary, Galway, Limerick, Waterford and Westmeath. They got to their first feile final in 1992 in Galway but were beaten by Oran 2-2 to 0-1. They first tasted success in 1995 when they travelled to Limerick, perhaps a good omen for this year. They won the Division 4 final beating Burgess of Tipperary 2-3 to 1-3.

Since 2000, Camross have represented their county nine times at Féile all over the country with the exception of 2008/2009 when Laois and Offaly hosted the games. In 2004 they won the Division 2 final beating Newmarket-on-Fergus of Clare 2-4 to 1-4. Again in 2010 they contested the Division 2 final but were beaten by Eire Og 2-3 to 1-1.

A lot of work and fundraising takes place by all the committee members, parents and players involved to prepare the club to go away for the weekend. The club would like to thank all who sold and bought silver circle lines. Thanks to Pauline Bergin for selling lines for the hamper and to anyone who helped in anyway.

The girls were very lucky to get great sponsorship this year. Camross-Boston linked company Brenco Construction, which is part-owned by the Moore brothers Knocknagad, have strong links in Camross GAA. They sponsored jerseys and skorts and these were presented to the team by their sister Mary Moore whose daughter Kirsten plays on the team.

The girls also got sponsored t-shirts from Pat and Sinead Collier whose daughter Aimee is also playing on the team. Sean Lowry sponsored the team socks and has two nieces, Caoimhe and Aedin playing and the club kitted the team and mentors out in tracksuits.

A large crowd of supporters are expected to follow the girls to Limerick and everyone is wished a happy and safe journey. The weekend will start for them with a joint mass with the Camross juvenile u14 boys who also represent Laois at Feile.

This makes the trip to Limerick this year even more special to the parish to have the U-14 boys and girls represent their club, parish and county and we are all very proud of them. The camogie club would like to wish the boys the very best of luck in the competition also. Mass will be on Sunday morning June 30th. Then on Friday morning July 5 the girls will head off to their host club Ballyagran.

Behind every team is a hard working management outfit who voluntarily give their time and expertise and the club wishes the very best of luck to Brendan Lowry, manager, Tina Cuddy, selector and Jason Culleton, selector.

On a lucky note for the weekend ahead in feile. In 1995 the winning team that also travelled to Limerick has very strong links to the present U-14 team. Mary Moore captain in 1995 has daughter Kirsten playing, Karen Cuddy has nieces Zoe and Amie, Therese Keenan has three nieces Aine, Sara and Kirsten. Jennifer Moore has niece Zara. Brigie Cuddy has two nieces Caomihe and Aideen and Sinead Delaney has daughter Chloe. Tina Cuddy one of this years selectors was team trainer in 1995 and will hopefully see her daughter Sara, Camross captain be successful this time.

Meanwhile, the Camross boys are also heading for Limerick this weekend. On Wednesday evening last the U-14 boys were presented with gear. The club would like to thank those who sponsored the gear, namely Neil Phelan (Ace Signs) Eddie Phelan (Phelan Catering Services), Jim Bennet (Coolrain Concrete), Sean Mortimer (Steel Cladding Services) and all their other numerous generous sponsors.

Camross defeated Borris-Kilcotton, The Harps, Naomh Eamonn and Na Fianna to reach the Féile. The boys team are based in Newcastlewest for the weekend. The will play Newcastlewest and Deel Rangers of Limerick as well as O’Donavan Rossa of Antrim. The club would like to wish the best of luck to the team and their mentors Arien Delaney, Alan Cuddy, Tadhg Doran and Thomas Dunphy.