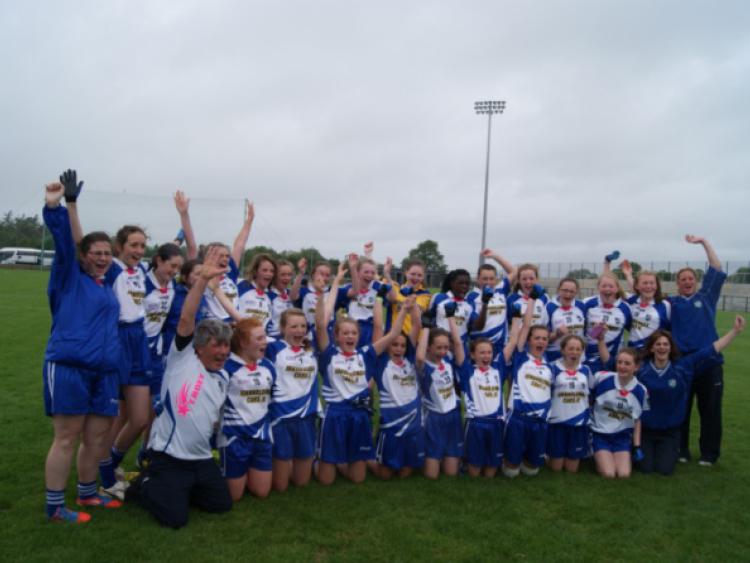 The side from the Portarlington, Killenard, Ballybrittas and Emo areas, brought a first All-Ireland Feile success to the area, since Courtwood’s Division 1 Ladies Football triumph in Donegal in 1997.

Ballymaguigan was the venue for the semi-final, where Conleth’s again impressed as they booked a 5-8 to 1-7 win over Wicklow champions St. Pat’s.

St Conleth’s had to dig deep, before taking honours on Sunday, with a 1-6 to 1-5 win over Wexford side Shelmaliers in the final at the Derry GAA Centre of Excellence at Owenbeg.

Leading 0-3 to 0-2 at half-time, thanks to scores from Eva Galvin, Fiona Dempsey and Sinead Cullen, St Conleth’s found themselves two points in arrears early on the restart, following a Shelmaliers goal.

Team captain Galvin lead by example with a goal to see her side regain the lead, with Naomi Luttrell (0-2) and Cullen (0-1) also claiming second half scores.

After the game Ava Galvin and vice-captain Nicole Havill jointly received the cup from GAA President Liam O’Neill. Fiona Dempsey was also honoured with the Player of Division 3 award. In the skills competition, Shauna Quirke represented St. Conleth’s, but was unlucky not to take victory after coming close to eventual winner Kate Whyte of Claudy.

The side were managed by Claire O’Connell, Tommy Hoey and Caroline Havill, with Anne Hogan acting as Feile Officer.