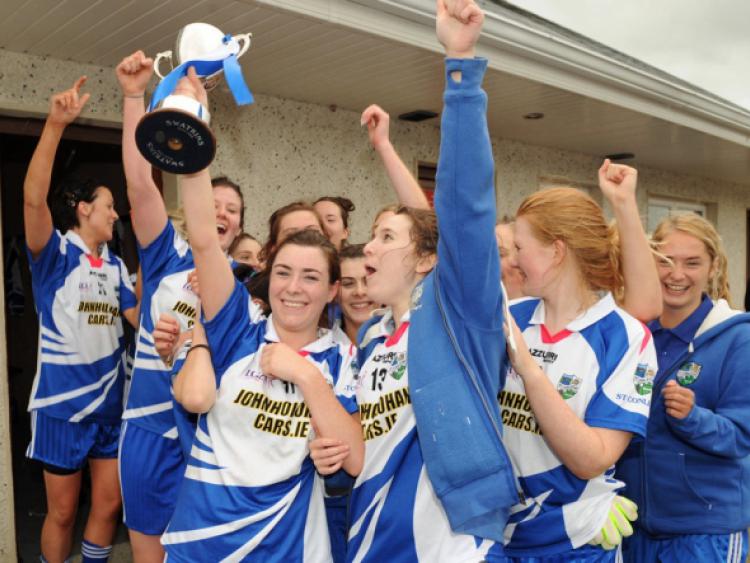 In a tit for tat game where both sides had periods of dominance, it was St Conleth’s who took the Senior B Ladies football title in Park Ratheniska on Saturday evening.

In a tit for tat game where both sides had periods of dominance, it was St Conleth’s who took the Senior B Ladies football title in Park Ratheniska on Saturday evening.

Shanahoe will rue some missed opportunities, but the Saints ability to find the net at decisive times was the decisive factor required to emerge victorious.

St Conleth’s started the brighter of the two sides, full forward Laura Dunne getting the scoring underway in the third minute with a point.

Aoife Kirrane added a second three minutes later, and ten minutes were on the clock before Shanahoe troubled the scorekeeper, but it was worth the wait. Midfielder Edel Siney crashed the ball to the net after good interplay with her midfield colleague Marion O’Grady.

St Conleth’s struck back with a goal of their own two minutes later through the boot of Niamh Cullen. Neat build up play between Aoife Kirrane and Orlath Kiely found Laura Dunne, who slipped the ball to the unmarked Cullen who drilled home form five yards.

Claire O’Connell registered an excellent forty yard effort to extend St Conleth’s lead as the first period drew to a close. However, there was just enough time for Shanahoe to raise a second green flag, a fine fifteen yard strike from Mary Fitzpatrick after good Shanahoe build up play, meaning St Conleth’s went to the brake with the narrowest of leads, 1-4 to 2-0.

Shanahoe were quickest out of the blocks in the second half, with two Noirin Kirwan points helping them take the lead at 2-2 to 1-4.

Shanahoe were now visibly growing in confidence, but a decisive scoring period between the 46th and 56th minutes, including two goals, set the winning platform for the Saints.

Sub Leanne Fallon was first to find the back of the net with an expertly delivered finish from eight yards. Half forward Shannon Costello was on hand to fire home the second, Laura Dunne again playing goal provider picking out, Costello who kept a cool head to crash home from fifteen yards.

St Conleth’s now lead 3-8 to 2-3 as the game entered the final five minutes, and Shanahoe hit the crossbar through Lisa Dunne as they desperately searched for goals.

Noirin Kirwan added a pointed free as the clock hit the sixty minute mark but St Conleth’s were able to close the game out despite Shanahoe’s courageous efforts.