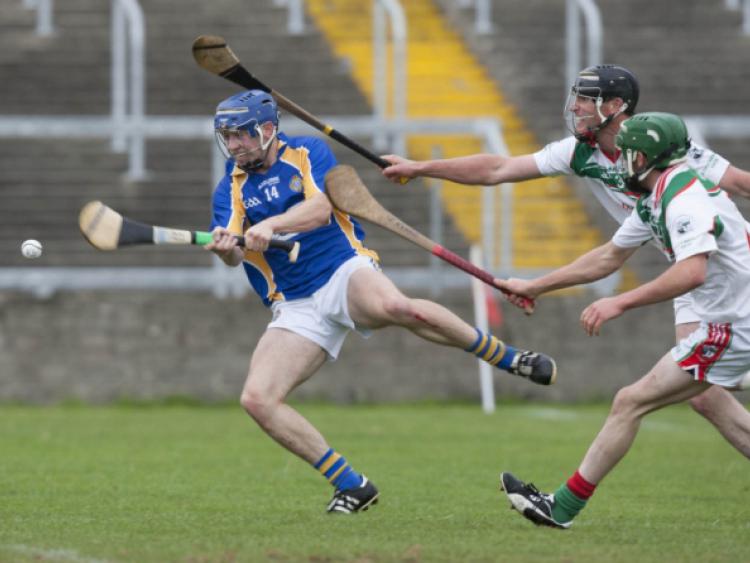 Clough-Ballacolla emerged from the latest two-game saga involving these great rivals, as they booked their place in the semi-finals of the Laois SHC on Saturday.

Clough-Ballacolla emerged from the latest two-game saga involving these great rivals, as they booked their place in the semi-finals of the Laois SHC on Saturday.

Meeting for the second time in less than a week, this game never matched the free-scoring first encounter, but it still delivered in terms of excitement.

There were more mistakes this time around, with both teams looking considerably more nervous on this occasion. While the quality was a bit lower, it still made it for an absorbing contest as it descended into a battle of nerve, and it was Ballacolla who had the most when it counted.

The game started at lightning speed, with John Purcell through on goal within 20 seconds, only to see his shot excellently saved by Danny Hanlon. Darren King missed the resulting 65, but made up for it with a point from a free soon after, and then it was Clough-Ballacolla’s turn to miss a goal chance.

A long ball into the Rathdowney-Errill penalty area was fumbled by Noel Brennan, and Shane Hanlon managed to get a boot on the loose ball only to see his soccer-style shot roll agonisingly wide.

The play quickly swung back in Rathdowney’s favour, as Ross King put the ball in the back of the net, only to see the effort ruled out and a penalty awarded instead, as he was fouled before he got his shot away. Brian Campion came up to take it, but his powerful effort was saved and the ball cleared.

That all happened in the opening five minutes, and Ballacolla would not register their first score until the eighth minute, with Willie Hyland pointing a free. He added a 65 moments later, but Enda Meagher quickly got Rathdowney back level with a fine effort from distance.

Clough-Ballacolla re-took the lead with a brace of frees from Willie Hyland, but Darren King and John Purcell quickly had Rathdowney-Errill back on level terms. Shane Hanlon scored an excellent point from long-range, but it was all Rathdowney-Errill after that in the run up to half time.

Darren King brought them level with a free, than added two more before the interval as Rathdowney-Errill lead at the halfway point once again, 0-7 to 0-5.

That was alsmost wiped out early in the second half when Tom Delaney as put through on goal for Ballacolla, but he shot wide from 14 yards, and Tadgh Dowling punished that miss soon after with a point from distance.

Stephen Maher quickly replied for Ballacolla before the first goal of the game arrived, as Willie Dunphy found the back of the net from the edge of the penalty area.

That score ratcheted up the tension, and Rathdowney responded with a 65 from Darren King. The scores were coming at either end of the ground now, and Damien Bergin split the posts form an almost impossible angle in the 41st minute as Ballacolla once again tried to pull away.

John Purcell reined them back in with a nice point on the turn, but the next two scores would be crucial.

The first was a free from Stephen Maher from 21 yards, before the same player then scored the second goal. Advancing in from the right wing, his first attempt at a shot was hooked by Lar Mahon, and when the ball dropped to the ground, he waited for it to bounce before lashing it past Noel Brennan and into the bottom corner.

Aidan Corby followed it up with a point, and despite two late scores from Darren King and Tadgh Dowling, Ballacolla had done enough to secure their place in the semi-finals, where it’s unlikely to get any easier as they are set to face Borris-Kilcotton.