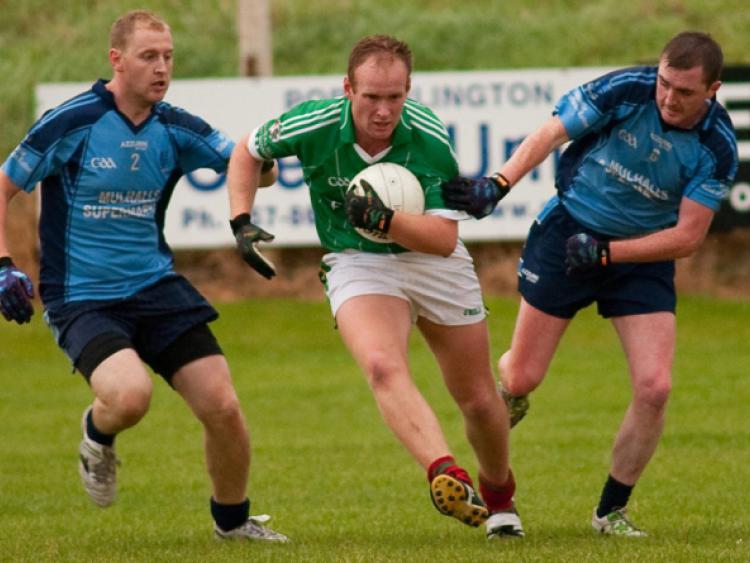 Trailing by three points at half-time after conceding 1-4 in the last eight minutes before the break, Ballyroan kept Clonaslee/St Manman’s scoreless in the second-half while scoring six points of their own to secure their place in the semi-final an incident packed game.

Trailing by three points at half-time after conceding 1-4 in the last eight minutes before the break, Ballyroan kept Clonaslee/St Manman’s scoreless in the second-half while scoring six points of their own to secure their place in the semi-final an incident packed game.

Played in changeable conditions in Portarlington last Friday evening, tempers flared midway through the second-half with both sides reduced to 14 men after an ugly mass brawl that also involved mentors from both teams. After a near five minute delay, order was eventually restored.

Ballyroan seemed to be in charge in the first-half as they built a 0-5 to 0-1 lead but Clonaslee/St Manman’s rallied in the final ten minutes of the half and went to the break three points ahead.

Thomas Tynan opened the scoring in the first minute for Clonaslee/St Manman’s but they failed to score for the next 20 minutes as Ballyroan took control of the game.

With the rain falling in McCann Park, Scott Conroy levelled the scores with just two minutes on the clock before MJ Tierney edged them ahead from a free soon after.

Another Tierney free extended the lead to two with full-forward Jamie Whelan making the score 0-4 to 0-1 after nine minutes. Padraig McMahon extended the advantage to four and Ballyroan were value for their lead having been very much on top in the opening quarter.

However as the sun came out, Clonaslee blasted their way into the game when Will Young cut through the Ballyroan defence before burying the ball into the back of the net.

That goal started a Clonaslee scoring spree with Michael Hyland, Aaron Culliton and Thomas Tynan (2) all adding points before the break to leave them 1-5 to 0-5 ahead at half-time.

Ballyroan set about reducing the deficit immediately after the restart with a brace of quick-fire points from Scott Conroy and he added a third after 40 minutes to level the scores.

Soon after came the five minute brawl that delayed proceedings and when the dust had settled Clonaslee/St Manman’s Seamus Rosney and Ballyroan’s John Murphy were sent off and the sidelines were cleared except for the manager of each team.

The interuption completely broke the momentum of the game and there was no scores for the next 15 minutes but in the final five minutes Ballyroan were the side who found the scoring touch with three late points to seal the win.

The first of the scores was controversial as Ballyroan briefly had 16 men on the field as substitute Mark McDonald ran after the referee with his slip of paper however he had no impact on the score which came from Scott Conroy.

The final two points came from MJ Tierney, one from play, one from a free, as Ballyroan closed out the win.