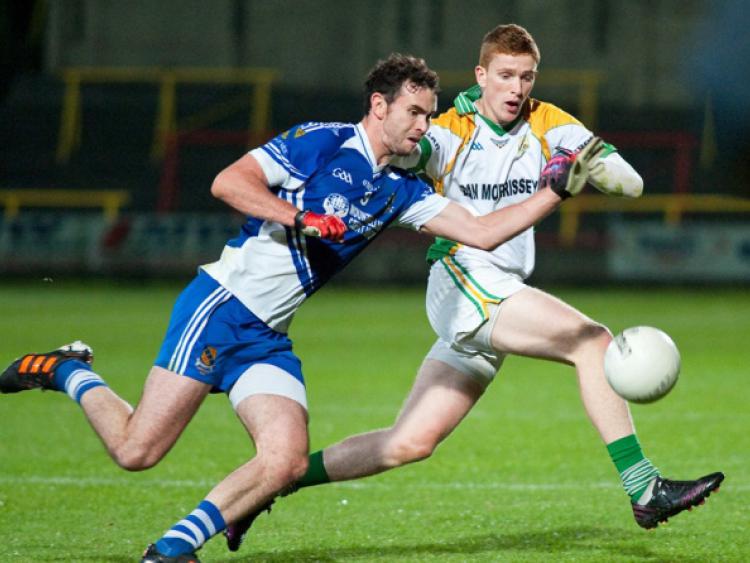 Mountmellick withstood a frantic late rally from Crettyard on Friday night to secure their place in the last eight of the Laois SFC.

Mountmellick withstood a frantic late rally from Crettyard on Friday night to secure their place in the last eight of the Laois SFC.

After starting brightly and leading by three after 15 minutes, they would score just four points over the remaining 45 as Mountmellick chipped away at the other end and claimed a deserved win.

They were the better side overall, and deserve credit for making it to the quarter-finals after many had them slated for a relegation scrap after a disappointing league campaign in Division 2.

They now meet Arles-Kilcruise in the next round, and like many other teams in Round 3, they will know that they are making a big step up in class when they next take to the field.

Much like the game between Stradbally and The Heath the following night, this one took a while to get going, although we only had to wait until the ninth minute for a score here, as Colm Coss pointed from distance.

Before then both sides had some terrible misses, with Mountmellick particularly guilty.

The Crettyard response to Coss’ score was instant, as from the kickout they worked the ball down field and won a free 35 yards out. Despite kicing into a stiff breeze, Cristóir Maher’s sweetly struck free sailed between the posts, and both teams were finally up and running.

Five minutes later, Crettyard were celebrating the only goal of the game. Full-forward Evan O’Carroll’s clever ball across goal found Eddie O’Reilly on his own eight yards out, and the corner-forward was the coolest man in O’Moore Park as he casually side-stepped Adam O’Reilly and slotted the ball into an empty net.

That should have seen Crettyard kick on, but it was Mountmellick who would respond the better of the two sides. Colm Coss pointed another long range free, before Niall Mullen opened his account, also from a placed ball, although this one was a bit closer.

When Mullen then went on a jinking run in the 23rd minute, and found a score to finish it off, the sides were level, with Mountmellick quickly pushing ahead with a point from Darragh Hanlon.

Crettyard were quick to respond as the pace of the game finally began to approach championship level, with Niall Purcell pointing from distance, but that would be their last score for some time.

Mountmellick went to the dressing rooms in the lead thanks to Coss’ third of the half, this one from a free, and he repeated the feat five minutes into the second half to push them two clear after 35 minutes of play.

They went three ahead five minutes later when Niall Mullen added a free, and Crettyard were getting cut adrift by Mountmellick’s greater efficiency in front of goal.

A wonderful score from Karl Donoher saw them four ahead, and Ciaran Hosey finally opened Crettyard’s account for the second half when he fisted over a point in the 50th minute.

Niall Mullen pushed the gap back to four with a fine point under pressure, but after that Crettyard went looking for a goal.

They began lobbing balls into the penalty area, and it almost paid off with two minutes to go, when the ball seemed destined for the back of the net only for Michael Lalor to save it on the line.

There was time for one last chance though, and it fell to Evan O’Carroll. He managed to get away a powerful left-footed shot, but Darragh Hanlon flung himself in the way and succeeded in deflecting the shot to safety, as Mountmellick held on for a two-point victory.