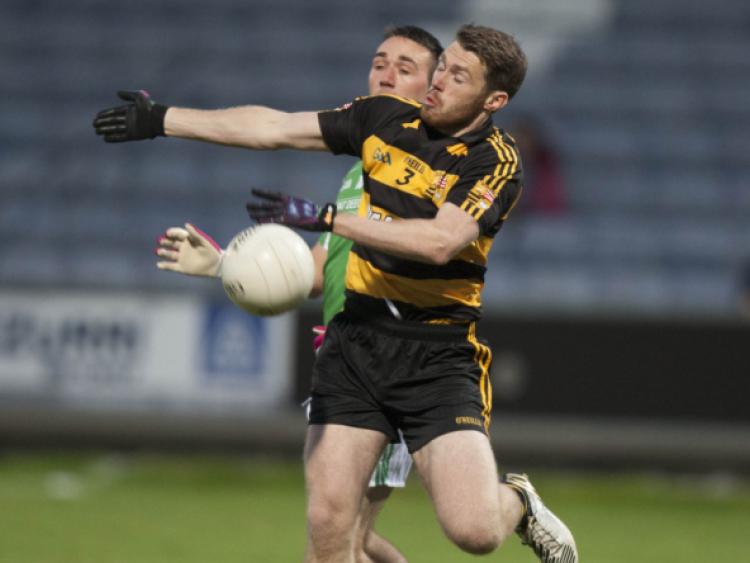 A strong second half display from The Heath saw them get the better of local rivals Stradbally in the last of Saturday’s triple header.

A strong second half display from The Heath saw them get the better of local rivals Stradbally in the last of Saturday’s triple header.

The Heath had needed a strong second half too, as they managed just one point in the opening period, as both themselves and Stradbally struggled for form in front of goal.

For their part, Stradbally were crippled with injuries, as Colm Kelly, Stephen Lawlor and John Donohue all missed out here, with Kelly’s absence keenly felt.

That was of no concern to The Heath, however, as they booked their place in the last eight a year on from scraping past Clonslee in the relegation playoff. They have put the disappointment of league relegation behind them and played some nice football in the second half, scoring 11 points in the process.

A quarter-final date with Arles-Killeen now awaits them, and they will no doubt enter as underdogs, but can take a lot of confidence from overcoming Stradbally here.

The key against Killeen will be to start that game as they finished this one, because a repeat of the first half performance will be more ruthlessly punished by Arles-Killeen.

In a very disappointing opening half hour, neither side managed a score until the 17th minute. The game wasn’t without chances, with The Heath in particular guilty of some poor shooting, and it was left to Stradbally’s Conor Delaney to finally open the scoring with a nice point off his left foot.

Like buses, after waiting for an age, two scores came in less than a minute, with Kieran Delaney adding another for Stradbally moments later.

The Heath were finally stung into life after those scores, with Evin Keane setting up Jimmy Nerney for their first, and indeed only, point of the half. They could have had a goal two minutes later, but Denis Booth’s shot was superbly tipped onto the bar by Derek Beale.

Stradbally managed two more points before half time, with Jody Dillon getting both (one from a free) to leave it 0-4 to 0-1 at the interval.

The Heath needed to really up the ante in the second half, and they made a promising start when Denis Booth pointed after 90 seconds. They hit the woodwork again four minutes later, when Robbie Dowling’s effort cannoned off the post, but Evin Keane pointed soon after.

Stradbally were finding themselves under a little pressure now, but their experienced corner-forward Greg Ramsbottom would settle the nerves with a good point off his left foot.

The Heath’s response was swift and clinical, with Chris Bergin pointing twice in three minutes to level the game at 0-5 each.

With momentum starting to build behind them, The Heath kept pressing on, and substitute JP Nerney rounded off a good move with a point from 35 yards, and Chris Bergin followed that up with another point from a free to put them two clear.

When Ciaran Booth added another for The Heath with eight minutes to go they looked odds-on to win, but Stradbally had one last sting in the tail. Wing-forward Tom Shiel won possession on the edge of the penalty area, and his low shot found the bottom corner to level things up.

That set up a frantic finale to the game, but it was The Heath who came up with the scores to win it. Chris Bergin pointed a free to edge them ahead again, and they really kicked on in injury time.

Substitute Padraig Whelan slotted over from close range, and Chris Bergin added his fifth of the half, from play. They still only lead by three, but Robbie Dowling’s monster point from outside the 45 was the last act of the game, as The Heath completed a second half comeback.