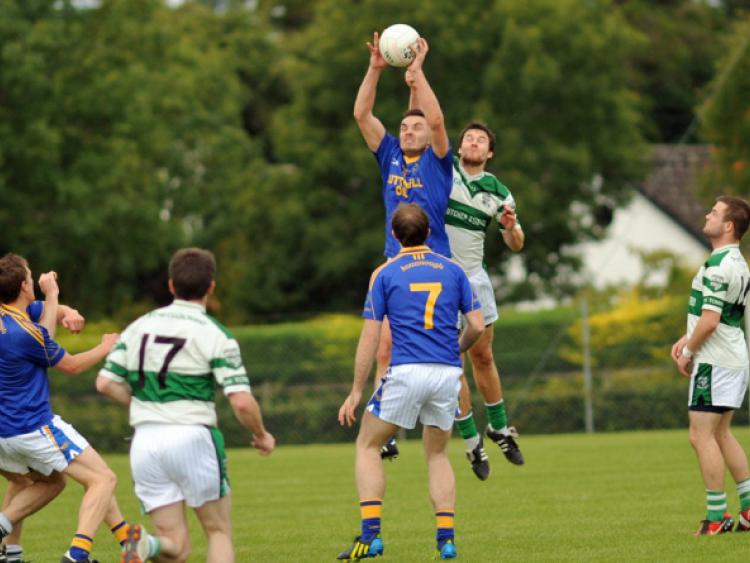 Annanough put their opening round defeat behind them with a dominant display from start to finish over Portlaoise in Ratheniska on Sunday.

Annanough put their opening round defeat behind them with a dominant display from start to finish over Portlaoise in Ratheniska on Sunday.

The defeat spells the end in this year’s campaign for an under-par Portlaoise, but Annanough looked extremely good here and this could provide the platform for a major assault this time around.

They certainly set the foundations early on with three of the Miller clan finding their range early as Donal, James and Colm established a three point advantage and, Annanough built on that to go in leading by six at the interval.

Murray Rogers’ free followed at the other end but a fine score from yet another Miller restored the four point lead, Steven doing the damage this time. Simon Miller’s second of the game and a sweetly struck John Scully ’45 put more daylight between the sides. Portlaoise were guilty of some poor shooting that could have closed that somewhat and when Steven Miller rather fortunately found the back of the net with three minutes of the half remaining, Portlaoise’s hopes were hanging by a thread.

Miller burst through the defence but his punched point effort was dropping short until Colm Miller applied pressure on Town stopper Graham Brody and his faintest of touches meant that the goal stood. Ricky Maher concluded the scoring in first half injury time with his second free.

Annanough hit the first three of the second half, and they now had one foot in the next round. And yet again it was three Millers who made their mark, with Steven, Simon and the imperious Donal all adding to their tallies.

Graham Brody made a couple of excellent stops either side of half time, and buoyed on by his display, Portlaoise did improve in the last twenty minutes before a Simon Miller goal wrapped things up. Dean Cullen and Ronan Molloy fired over to reduce the deficit to six points but when a superb team move was clinically converted by Miller the Town men must have known their fate.

John Scully added another fine dead-ball effort before Ronan Molloy and James Miller traded scores as the game fizzled out in the end.