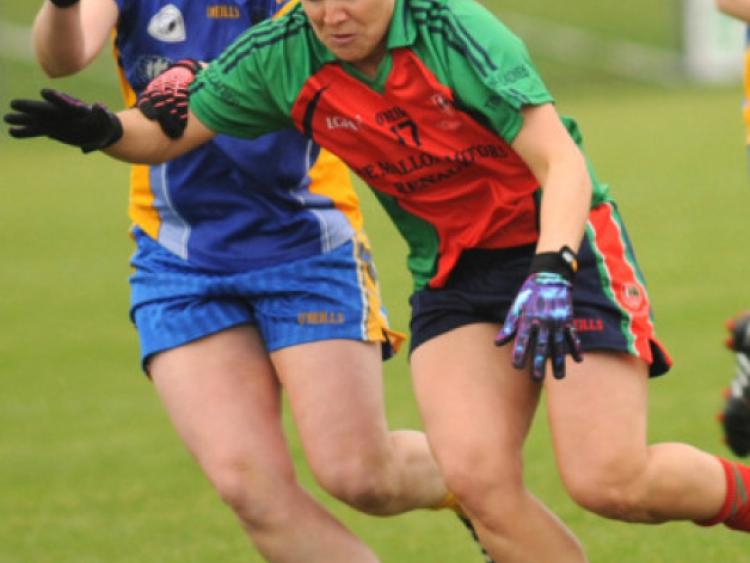 Both teams had opportunities to take home the silverware but it was the Mountmellick side, aided by a 57th minute goal who did just enough to claim the spoils.

On what was the most important day in the Laois ladies football calendar it was fitting the two top teams in the county matched up in the senior decider. With a plethora of county players on display the game lived up to its billing and provided high drama, excitement and quality play.

Martina Dunne got Timahoe underway with a fifth minute free and pointed from play five minutes later to open up an early two point lead. Sarsfields Ciara Burke was first to strike for her side a minute later following good build up play from Lauramarie Maher. Maher was on hand to score the game’s first goal on the quarter hour.

She finished home from eight yards after Tracey Lawlor picked here out from a free. Veteran Angela Casey struck back with a fine thirty yard point to leave the sides level 1-1 to 0-4 on the twenty minute mark. Meagan Dunne and Tracey Lawlor fired over for Sarsfields to open up a two point gap as the first period drew to a close.

There was just enough time remaining for Sarsfields Ciara Burke to raise her side’s second green flag. Maher turned provider picking out Burke with a neat pass who made no mistake from ten yards, giving Sarsfields a 2-3 to 0-4 lead at half time.

Tracey Lawlor added two early second half points to build on Sarsfields first half momentum to open up a seven point gap by the 35th minute. However, Timahoe were never going to give up their crown without a real battle and completely dominated proceedings from this point on.

Laois star Aishling Quigley fired over from30 yards and Mo Nerney then reduced the gap to five, Timahoe clearly had the bit between their collective teeth at this stage.

Martina Dunne further reduced the gap with a free and pointed from play as the game entered the final five minutes. Mo Nerney fired over with a minute of normal time left followed by Maggie Murphy to leave the smallest of margins between the sides. However Lauremarie Maher settled proceedings when she hit Sarsfield third goal four minutes into injury time.

Sub Claire Conlon fired over a match settling 30 yard point from the resulting kick out as Sarsfields held on to win 3-7 to 0-12.