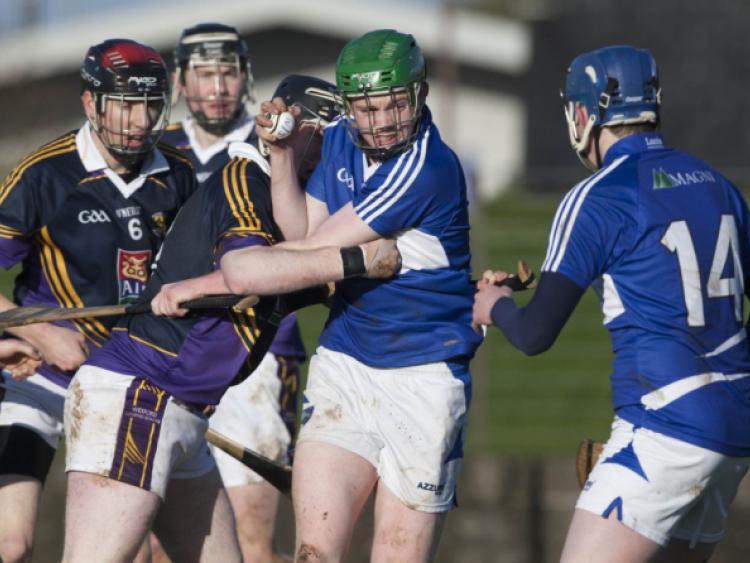 Despite their dramatic eight point fightback and injury-time leveller that sent the game to extra-time, Laois Schools’ Leinster Championship campaign came to an end in Rathdowney on Saturday last as Shane Murphy’s injury-time goal swung the result in the Wexford side’s favour.

Despite their dramatic eight point fightback and injury-time leveller that sent the game to extra-time, Laois Schools’ Leinster Championship campaign came to an end in Rathdowney on Saturday last as Shane Murphy’s injury-time goal swung the result in the Wexford side’s favour.

Having played into a near blizzard-like wind in the opening half, Laois Schools trailed by seven points at the interval before going on to outscore their Wexford counterparts by 1-7 to 0-3 in the second half - including a dramatic sixty-first minute equaliser from Mark Kavanagh to send the game to extra-time.

Wexford Schools looked to put their wind-advantage to use from the off and opened the scoring through an Alan Murphy free after six minutes. Wexford went to build on this with a further 1-4 in the ten minutes thereafter - while the Laois Schools scorecard remained blank.

Sean Stafford followed up Murphy’s point three minutes later before Billy Kelly, Alan Murphy and Nicky Lawlor all raised the white flag for the Wexford side. Finally after sixteen minutes Wexford Schools grabbed an inevitable goal with Sean Satfford firing across the face of the Laois goal to open an eight point gap between the sides.

Laois Schools finally broke the deadlock and registered their first score of the day after twenty minutes with Mark Kavanagh splitting the posts from a free, before grabbing another from the resulting puck-out to cut the Laois deficit down to six points with nine minutes remaining in the half.

Wexford Schools responded almost immediately with Billy Kelly and Alan Murphy hitting the target before their goalkeeper, Darragh Hughes, lifted the Laois Schools white flag with a massive strike from his own forty-five metre line.Laois rallied in the final minutes of the half with a Kavanagh brace reducing the Laois Schools deficit to seven points with the scoreline reading 1-8 to 0-4.

Backed by a deteriorated wind in the second half, Laois Schools restarted the scoring after just a minute with Mark Kavanagh slotting a free before going on to slot his sixth point five minutes later.

It took Wexford Schools nine minutes to acclimatise to their conditions for the second half with Joe Coleman interrupting the Laois scoring to put six between the sides once again.

Laois Schools continued to chip away at the Wexford lead with Kavanagh firing over three - the third of which was the score of the game - and Stephen Bergin opening his account as Laois brought themselves to within two points of the Wexford outfit with twelve minutes left on the clock.

Wexford Schools reinstated a three point lead two minutes later with Coleman grabbing his second of the day. Now with just seven minutes remaining and Laois Schools trailing by a single goal, Mark Kavanagh lifted the green flag with his superb sideline cut from forty-five metres rattling the Wexford net to leave all to play for in the dying minutes.

With four minutes left Wexford Schools looked to have claimed the winning point with Alan Murphy slotting a crucial point, but a dramatic injury-time point from Mark Kavanagh levelled the game at 1-11 apiece as the final whistle sounded.

Following a fifteen minute period of uncertainty of whether a replay or extra-time would ensue, extra-time was eventually given the nod as the players prepared their legs for an additional two twenty-minute halves.

Wexford Schools won the coin toss and opted to play with the behind their backs in the opening half of extra-time, a move that ultimately decided the game as they racked up 1-2 in the half while also keeping Laois Schools scoreless in the process. Alan Murphy picked up a brace, while Shane Murphy’s rifled shot beat Enda Rowland in the Laois goals.

Laois Schools rallied in the final half with John Lennon, Mark Kavanagh and Enda Rowland all adding points, but they simply couldn’t bridge that final three points as Wexford Schools progress to the next round.