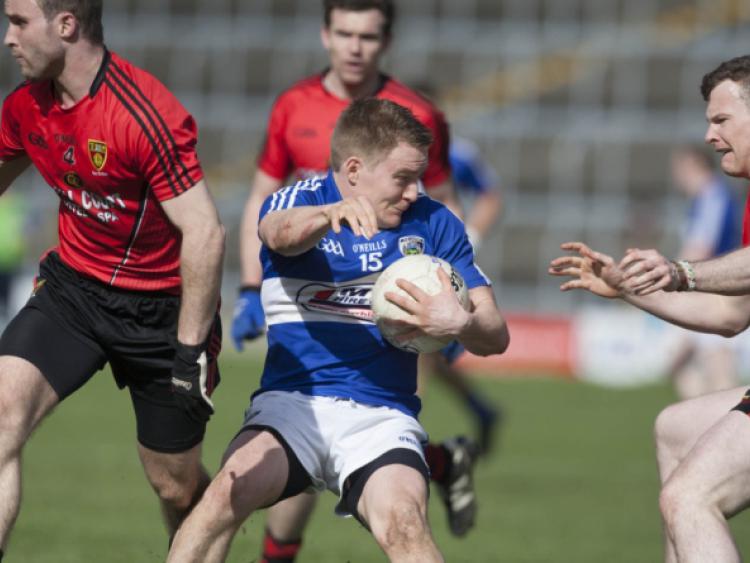 Laois manager Tomas O Flatharta was delighted to see his side secure their Division 2 status for 2015 on Sunday afternoon, as a three point win over Down consigned Armagh to the drop.

Laois manager Tomas O Flatharta was delighted to see his side secure their Division 2 status for 2015 on Sunday afternoon, as a three point win over Down consigned Armagh to the drop.

Speaking afterwards, the Kerry man was understandably thrilled with both the result, and the nature of Laois’ performance. “I thought it was a very good performance from the lads, and I’m delighted that we will be playing in Division 2 again next year.”

Coming into the game, Laois knew that they simply had to win to get themselves out of the bottom two, and the manner in which the players reacted to the pressure of a must-win game was something which O Flatharta took a lot of satisfaction in. “It was of course (a must win game), otherwise we were gone to Division 3.

“I thought the lads showed a lot of character today again, bar the Donegal game i thought we showed that in most of the games really. I thought we were a bit calmer and more resilient today and we got the scores, whereas other days we maybe didn’t get those scores, but a lot of credit goes to the lads, they knew during the week that they had to battle hard here today”

Laois played like a side who knew exactly what was at stake, as they tore into Down and were nine points up at the break. They were comfortable for most of the second half too, even if Denis Booth’s red card made things difficult, and O Flatharta paid tribute to the way the players kept their performance levels up in the second half, when they had struggled in that regard earlier this year.

“If you looked at the second halves we have played this year, the first ten or fifteen minutes we have been caught a couple of times, and we were very aware of that and I think the lads battled very hard for one another and they didn’t allow that to happen. ”

Overall then, how did the Laois boss assess the league? “I suppose we started with the Donegal game and I think we would have to admit that we weren’t at the races that day, but I think since then we have been gradually improving. We won a few games, but then we had a few games which we didn’t win, even though I felt the lads performed very well in those games, we did some good things in the games, sometimes we did some silly things, and our finishing at times wasn’t up to scratch.

“Where are we? I suppose we’re still learning, I thought we fought much better for each other today, I thought we were more composed in front of goals, but the one thing that we have is a lot of character and the lads work very hard for each other.”

Roll on the championship on May 18.