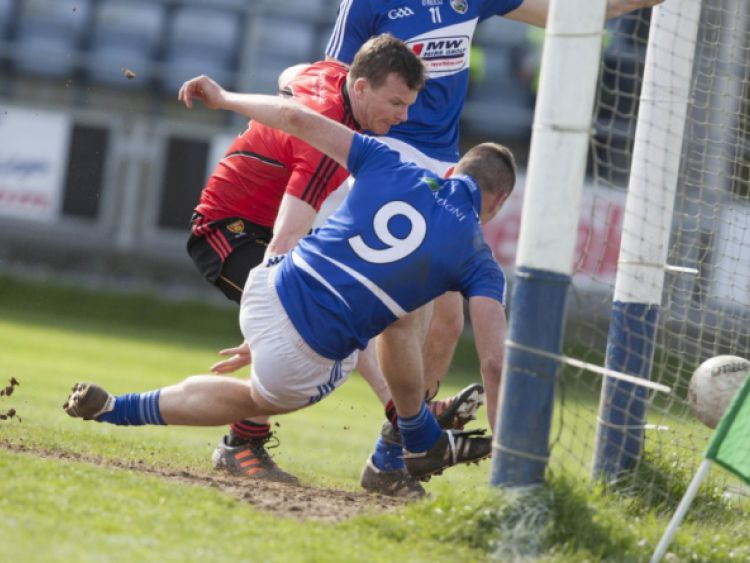 Laois secured their Division 2 status for 2015 thanks to a three point win over Down on Sunday afternoon, as they survived a frantic second half to seal the victory.

Laois secured their Division 2 status for 2015 thanks to a three point win over Down on Sunday afternoon, as they survived a frantic second half to seal the victory.

At half time it looked like it would only be a matter of how much Laois would win by, as they completely dominated the opening 35 minutes and lead by nine points at the interval. They probably should have lead by more, but Down looked so utterly hopeless it didn’t appear as though it would return to haunt them.

It was much the same story in the second half until Down won a penalty in an incident which saw Denis Booth red-carded. That gave the Mourne men a fresh impetus, and they came on strong in the closing stages, but Laois had done enough to ensure the win.

It was a Laois performance which deserved to be rewarded with a place in Division 2 for next year. They knew beforehand what they had to do, and no player shirked their responsibility as they tore into Down from the start. They were four points up after six minutes, and even when Down scored a goal against the run of play, it didn’t upset their focus.

They pushed on again to lead by ten points at one stage in the second half, and showed real character to rebuff Down when they were reduced to 14 men and had to dig out the result.

Laois can enjoy their win but attention will have to quickly turn to the championship, as there is plenty of work still to be done. No side will perform in the championship as abjectly as Down did here for 40 minutes or so.

That wasn’t Laois problem, obviously, and much of Down’s problems came from the fact that Laois were way more up for the game than they were.

With just 25 seconds gone Tomás O Flatharta’s side were on the scoreboard, as David Conway split the posts from a tricky angle to give Laois a good start. Donie Kingston added another point moments later before Denis Booth put in a crunching hit on Paul Devlin, as Laois left Down in no uncertainty that they meant business.

Colm Begley then intercepted a stray pass in midfield and set John O’Loughlin up for his first score, and Ross Munnelly then made it four points in six minutes when he fired over the bar from 45 yards.

Down had barely made it into Laois’ half during that spell, but with their first meaningful attack they scored a goal. It was all very simple for them too, as they ran the ball straight through the Laois defence, with Conor Maginn applying the finish low past Graham Brody.

A full 13 minutes would pass before another score was registered, and it was Laois who broke the drought with a point from Donie Kingston. That sparked the home side to life, and seconds later, Darren Strong put John O’Loughlin through in the penalty area, as he rounded Brendan McVeigh and tapped home to an empty net.

David Conway, Ross Munnelly and Conor Meredith all added points before Down scored again, with Donal O’Hare slotting over their only point of the first half. That did little to derail Laois’ momentum, however, and they were quickly back on the scoring trail.

Ross Munnelly floated over his third point of the half before Darren Strong sent a 45 flying between the posts as Laois headed to the dressing rooms 1-10 to 1-1 ahead, and if anything a little disappointed not to be further ahead, such was their dominance.

It was much the same story for most of the early stages of the second half, with Laois comfortably ahead until Donal O’Hare was brought down in the penalty area by Denis Booth, and The Heath man was given a straight red card.

Aidan Carr stepped up to the resulting spot kick, and he thumped it to the net to bring Down right back into it. With an extra man, they could have really pushed on, but to Laois’ credit it was them who scored next, as John O’Loughlin applied the finish to a nice team move.

David Conway and Jerome Johnston then traded points, but as time ticked down, Down chipped away at Laois’ lead. In injury time they got to within three, and that gave them the incentive to score an equalising goal.

They almost got it too, as they flooded forward in the last minute or so and managed to get a shot in, but Paul Begley and Padraig McMahon threw themselves in the way, and the danger was averted.

The final whistle sounded moments later, and it sparked scenes of both joy and relief, as Laois held on for the win.