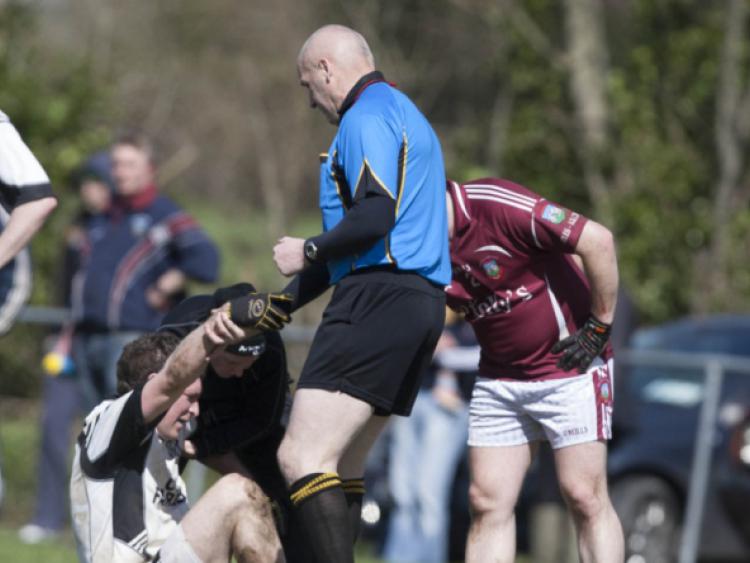 Arles-Killeen kick-started their 2014 League campaign with a win over neighbours, Arles-Kilcruise, to see them claim the bragging rights with a narrow one-point victory in Killeen on Sunday morning.

Arles-Killeen kick-started their 2014 League campaign with a win over neighbours, Arles-Kilcruise, to see them claim the bragging rights with a narrow one-point victory in Killeen on Sunday morning.

Arles-Killeen opened the scoring with a quick-fire brace of points from Donie Brennan to see them go two points ahead early on. Anxious not to let Killeen have things all their own way, Chris Conway and Fran Egan both raised the white flag to level the proceedings.

Killeen quickly reclaimed the lead with Donie Brennan and Jason Enright splitting the posts to see them go two points clear once again, before Dermot Nolan narrowed the Killeen lead back to the minimum with a well-taken point.

Clearly feeling like they should’ve been further ahead at this late stage in the half, Donie Brennan and Billy O’Loughlin extended the Killeen lead to three points as the half time whistle loomed.

There was to be one final twist in the half as the industrious Fran Egan found just enough time remaining in the half to slice his way through the Killeen defence, and bury the ball in the roof of the net to level the game at 1-3 0-6 at the interval.

Billy O’Loughlin re-opened the half with his second point of the day to push Killeen into the lead once again, before Jason Enright doubled their advantage three minutes later. Kilcruise quickly dismantled the Killeen lead with Fran Egan and Chris Conway adding points to square things up yet again.

With just under fifteen minutes left to play, Donie Brennan pushed his Killeen side in front with a superb effort from a sideline ball to claim the lead. It didn’t last long though as Arles-Kilcruise substitute, Ciaran Lawlor, came off the bench to level the game at 0-9 to 1-6 with time running out.

But there was still time for Arles-Killeen to pull away from their neighbours, with Sean O’Shea on hand to kick the winning point as Killeen ran out narrow one-point victors to open their League campaign with a win.