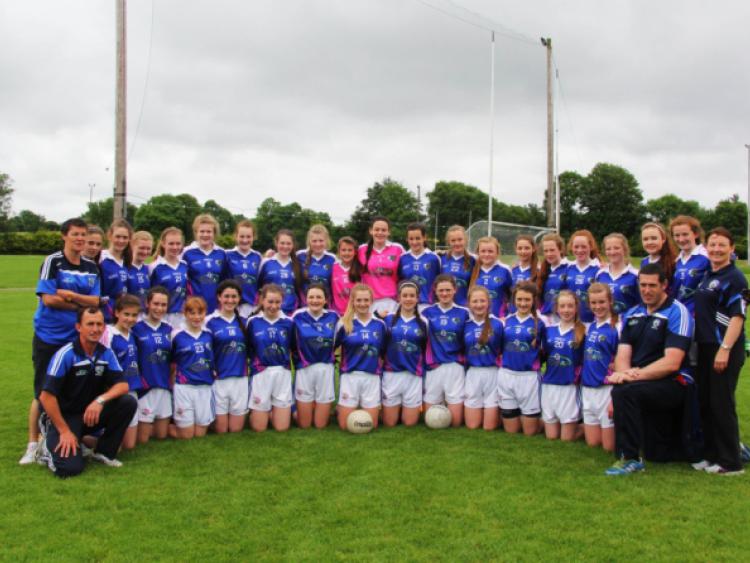 The onward march of the Laois U-14 Ladies Footballers came to a halt in Banagher on Saturday when they were comprehensively defeated by Galway in the All-Ireland B semi-final.

The onward march of the Laois U-14 Ladies Footballers came to a halt in Banagher on Saturday when they were comprehensively defeated by Galway in the All-Ireland B semi-final.

Expectations of Laois supporters were lifted following the team’s comfortable win over Kildare in the Leinster Final by 8-9 to 1-7, and it was generally felt that The O’Moore girls would match whatever Galway could throw at them.

However hopes were dashed at an early stage in this encounter as it very soon became obvious that Galway were on top in most sectors of the field. By

half time the Westerners had established a solid grip on the game with a commanding lead of 2-4 to 0-1, Laois’ sole first half score coming from a Carey O’Brien free.

The second half started promisingly for Laois as newly introduced sub Amy Byrne finished expertly to the net from an Emma Lawlor cross. Unfortunately the goal failed to lift the spirits and within two minutes Rebecca Conway and Andrea Trill added a goal and a point for Galway before Erone Fitzpatrick pulled one back for Laois.

Despite the constant pressure, the Laois back-line distinguished themselves well with Gillian Keane at centre-back and Zoe Keegan and Eabha Dunne also prominent.

They were unable to stop the Galway tide however as the Connaught side continued to pile on the agony and, in a four minute spell between the 21st and 25th minute, scored two goals and three points to run out winners.

To their credit Laois continued to battle, long after the cause was lost, but points each from Lawlor and Fitzpatrick and an excellent goal from full-back Isabelle O’Toole were scant reward for a valiant effort.