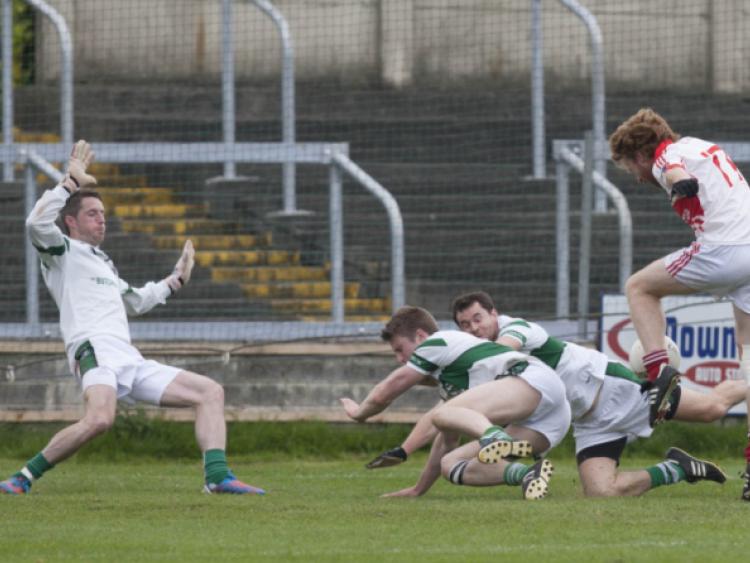 Portlaoise got their quest for an eighth successive Senior Football title off to a winning start on Sunday, but not before they were pushed right to the limit by an excellent Emo side.

Portlaoise got their quest for an eighth successive Senior Football title off to a winning start on Sunday, but not before they were pushed right to the limit by an excellent Emo side.

Two poacher’s goals from Bruno McCormack in the first-half were crucial as the defending champions dug deep into their reserves before coming away with a two point win after an engrossing hour of football.

Emo had a host of goal scoring chances themselves, particularly in the second-half, but they were unable to convert and those missed opportunities ultimately cost them the game.

With the man advantage, until the closing minutes when they were also reduced to 14, Emo were the better team and made good use of the extra player with Shane Murphy impressive as the sweeper. Darren Strong and Paul Lawlor drove them on and won the majority of the ball in the middle of the field. Mick Lawlor again rolled back the years, tormenting the Portlaoise defence at full-forward but despite all their good play, all their hard work and having their opponents on the back foot for much of the game, Emo never managed to get their noses in front, and that was critical.

Twice they drew level in the second-half but on each occasion, Portlaoise showed their experience and managed to manufacture a score when they desperately needed it at the other end. Craig Rogers, Murray Rogers and Conor Boyle got those scores at crucial times as Portlaoise managed to drag themselves over the line.

The sides were locked at three points apiece but Portlaoise pulled clear with 1-2 in four minutes with Bruno McCormack scoring the goal on the rebound after Paul Kirwan in the Emo goal had saved brilliantly from Gareth Dillon.

Leading by 1-5 to 0-4 after 16 minutes, Portlaoise were in control of the game but they were dealt a blow when Paul Cahillane, who had started the game in super form kicking two early points, received a straight red card on 20 minutes after he caught Darren Strong in the face with what looked to be an attempted hand off.

Emo kicked three of the next four points, two from Evan Costello and an excellent score from Darren Strong to get back within three but they were caught with a sucker punch before half-time when Bruno McCormack out-jumped Paul Kirwan to flick a high dropping ball to the back of the net.

Paul Lawlor kicked the last score of the half for Emo to get back within five and soon after the restart the gap was down to just one as Emo rattled off four in a row, two from Strong and one apiece from David Gorman and Mick Lawlor.

A point from a free edged Craig Rogers left the gap at two but Paul Lawlor and Darren Strong were again on target as Emo drew level with 42 minutes on the clock.

Three times in the next five minutes, Emo got a good sight of Micky Nolan’s goal but Evan Costello flashed wide, and Mick Lawlor had the ball flicked off his toe as he lined up to burst the net. Micky Nolan was also quickly off his line to break up another attempt as Portlaoise held on by their fingernails.

In the end those missed chances were crucial as, after Murray Rogers and Evan Costello exchanged points, Brian Glynn, Conor Boyle and Bruno McCormack all found the target for Portlaoise as they jumped into a late lead.

Paul Lawlor was sent off late on for a high tackle on Craig Rogers, again there seemed to be little intent, but Emo still had once last chance to snatch a draw. They were awarded a 14 metre free deep into injury-time but with 12 Portlaoise players on the line, Evan Costello went for power and his shot flew over the bar.

The final whistle went soon after, much to the relief of Portlaoise’s players, management and supporters, and while Emo will be disappointed to have lost out, they showed again that they are a team to be reckoned with in this year’s championship.