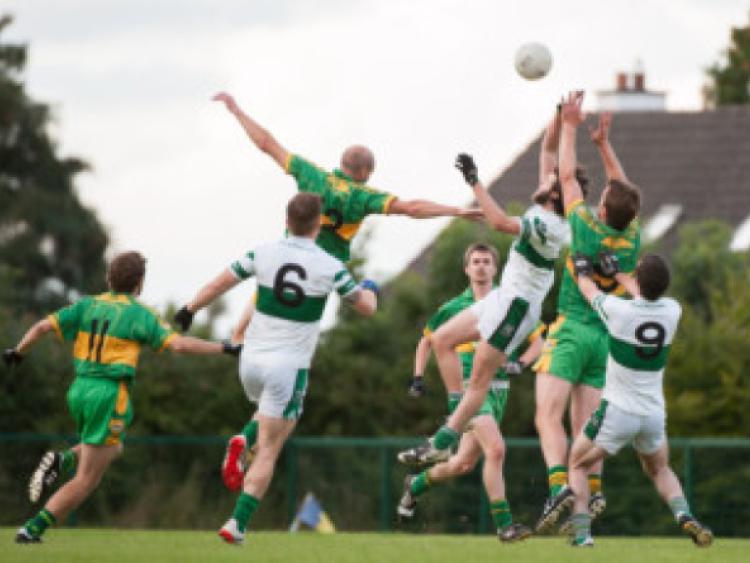 Three goals in six minutes of the second half, two from the penalty spot sealed the deal for Portlaoise in a one-sided affair in Annanough on Friday evening.

Three goals in six minutes of the second half, two from the penalty spot sealed the deal for Portlaoise in a one-sided affair in Annanough on Friday evening.

Portlaoise opened up the scoring with a point from Donnacha O’ Reilly in the fourth minute followed by a free from Ricky Maher. Kieran Delaney got the first score for Park-Ratheniska in the 12th minute from a free won by Darragh Nolan.

Park-Ratheniska never really settled into the match in the opening half, with the exception of a point each from Stephen Knowles and Darragh Nolan in the full forward line. Park-Ratheniska struggled to combat the swift passing and direct ball of the Portlaoise players into the forward line where the dividends paid off. Scores from Dean Lynch, Liam McGovern and Ricky Maher all helped Portlaoise to go in leading 0-9 to 0-3 at the break.

Park-Ratheniska started the second half strongly. John Sugrue, who impressed throughout, caught the ball from the throw up, laid it on to Darragh Nolan who with the help of Kieran Delaney, set Denis Cahill up for a well taken point inside the first minute.

Two minutes later Oisin Nolan kicked a sideline ball into the hands of John Sugrue who sent a diagonal ball into Darragh Nolan who slotted it over the bar. Declan Coulter made a good run up the wing and set Kieran Delaney up with his second point of the game. Substitute Kevin Fitzpatrick scored a free for Portlaoise before John Sugrue, Oisin Nolan, Stephen Knowles and substitute Paddy Kelly combined to allow Kieran Delaney find the target again.

Brendan Fingleton worked well and passed the ball to Denis Cahill who kicked a fine point to put Park-Ratheniska within two points of their opposition with 18 minutes left to play.

Park-Ratheniska’s dominance diminshed after this and Kevin Fitzpatrick was on hand to slap the pass from Donnacha O’ Reilly down for soccer player Aaron Rafter to volley it into the back of the net. This score was key for Portlaoise as the goal came against the run of play.

Park-Ratheniska had dominated for the opening 12 minutes of the half but things went from bad to worse for them two minutes later when Martin Kelly was given a black card for his foul on Portlaoise corner forward Martin Staunton in the square and Liam McGovern stepped up and slotted the penalty to the left hand side of Brian Kelly.

Moments later, Martin Staunton was tackled again in the square and Brian Kelly experienced a moment of deja vu as Liam McGovern again kicked the ball to his left hand side and into the back of the net.

This was a complete turnaround with the score 3-10 to 0-8 after three goals in six minutes for Portlaoise which ended the game as a contest despite ten minutes remaining. Park-Ratheniska’s John Sugrue scored a fine goal in the fifty seventh minute, making a great run through the Portlaoise defence but this was little consolation. Portlaoise now sit pretty on the top of Group B while Park-Ratheniska remain at the bottom; both teams have just one game remaining.