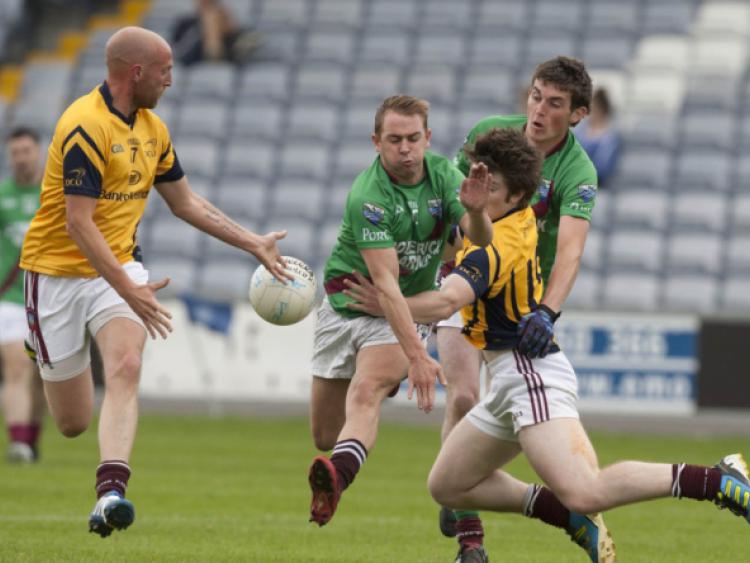 Despite not scoring in the opening half, Portarlington emerged victorious against Arles-Kilcruise on Sunday afternoon in O’ Moore Park.

Despite not scoring in the opening half, Portarlington emerged victorious against Arles-Kilcruise on Sunday afternoon in O’ Moore Park.

The game got off to a cracking start, a mistake by Portarlington’s defence allowed county captain Ross Munnelly to slot a low ball into the corner past Port’s goalkeeper Shane McAuley with just 40 seconds on the clock.

Arles-Kilcruise captain Rory Stynes kicked a superb score in the third minute after a visionary pass by Kevin Meaney. Munnelly set David Conway up for his first score of the game in the 10th minute. This turned out to be the last score of a very disappointing first half which had made such a promising start.

Portarlington kicked a dismal six wides in the opening half compared to Arles-Kilcruise’s four. Shane McAuley had a point disallowed which was awarded by the umpires but over turned by referee Maurice Deegan who may have had a better view of the tight angled shot in the 16th minute. This was as close as Portarlington looked to scoring in the opening half. Arles-Kilcruise played almost every player behind the ball, leaving Ross Munnelly isolated in the full forward line closely marked by Port’s Adam Ryan. Both teams played a sweeper but this didn’t work in Portarlington’s favour and they continuously struggled to penetrate the resilient Arles-Kilcruise defence.

Despite Arles-Kilcruise leading 1-2 to 0-0 at half time, they didn’t use the strong breeze to their advantage and should have extended their lead and capitalised on the loose marking by the Portarlington defenders in the first half.

It was a starkly different Portarlington side who emerged at half time. Cathal Ryan won the throw up, laid the ball off to Jonathan Fullam who ran through and slotted the ball over the bar.

The Portarlington defence stood strong against the Arles-Kilcruise attacks in the second half. Jason Moore, Adam Ryan and Jonathan Fullam always looked threatening as they attacked from the back and Arles-Kilcruise didn’t seem to have an answer for the dominance which was the polar opposite to the Portarlington side they faced in the opening half.

The Munnelly brothers combined in the 36th minute to set David Conway up for his opening score of the half to extend their side’s lead. Port’ substitute Graham Weldon set David Murphy up for a well taken point almost immediately after being introduced.

Weldon added a point himself a minute later, allowing the wind to carry his long range effort over the bar. Kevin McGrath and Shane McAuley added points for Portarlington but David Conway responded with a point from a tight angle for Kilcruise, leaving the score at 1-4 to 0-5 with 15 minutes remaining. Kilcruise were clinging to their lead but it should have been closer. Colm Murphy dispossessed the Arles-Kilcruise ‘keeper coming out with the ball and was in on an open goal however referee Maurice Deegan awarded a free instead of playing advantage.

McAuley scored the free followed by another five minutes later. Conway scored Arles-Kilcruise’s last point of the match from a free in the 55th minute as Portarlington stepped it up another gear.

Cathal Ryan brought the score level when his long range free bounced over the bar, such was the strength of the breeze. A well worked point from a Keith Bracken ended with Colm Murphy scoring with three minutes remaining to cheers from the stand from the large Portarlington support.

Shane McAuley added a point and David Murphy slotted the ball over the bar in the last minute, Chris Booth setting him up for an excellently struck point.

That completed an incredible turnaround as Portarlington condemned Arles-Kilcruise to the relegation play-off. While strong at the back, Kilcruise were toothless in attack as they had too many players behind the ball leaving Ross Munnelly and David Conway severely outnumbered at the other end