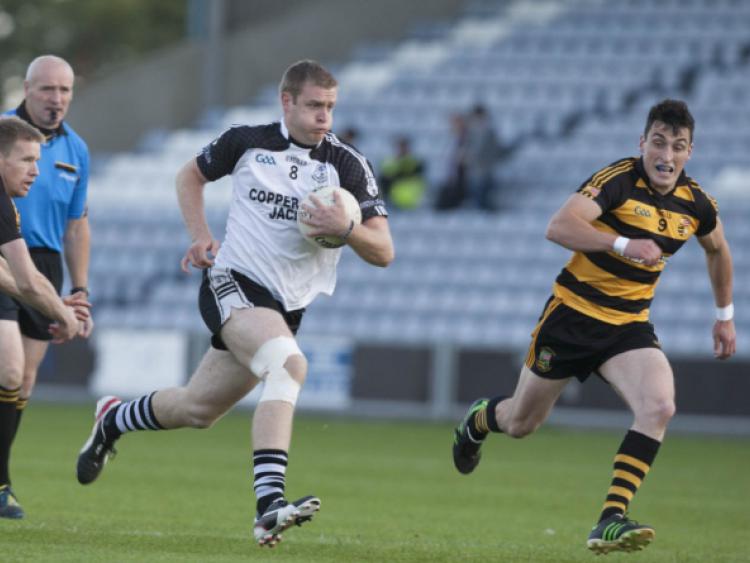 In a well-contested game throughout, Arles-Killeen sealed their second victory of this year’s Championship with a six point win over a battling Heath side in the second of Saturday’s games in O’Moore Park.

In a well-contested game throughout, Arles-Killeen sealed their second victory of this year’s Championship with a six point win over a battling Heath side in the second of Saturday’s games in O’Moore Park.

With The Heath having claimed a four point win over Stradbally in the opening round, and Arles-Killeen having dragged themselves past Ballyroan Abbey in a lacklustre performance, pundits had Arles-Killeen there for the taking. Not helped by Donie Brennan’s untimely departure after just 17 minutes due to injury, The Heath gave Killeen a rattle in O’Moore Park on Saturday.

From the throw-in, Arles-Killeen went straight on the attack with Donie Kingston powering through to force a save out of Joe Walshe in The Heath goals after just thirty seconds. Five minutes later, Kingston again broke through The Heath defence before shrugging of two challenges to split the posts for the first score of the day.

The Heath replied a minute later through a Cathal Whelan free from close-range, before Jason Enright slotted a twenty metre free of his own to keep Killeen in front. And a minute after Enright’s effort, Whelan lifted the white flag again, this time from play to level the sides once again.

Paul Kingston announced his arrival to the game with a fine over-the-shoulder strike after 11 minutes, before doubling his tally two minutes later with a fantastic curling effort of his left boot to push Arles-Killeen into a two point lead approaching the quarter of an hour mark.

The Heath levelled the game for third time with four minutes remaining in the half, with both points coming from the boot of former County player, Daithi Carroll, to keep The Heath exactly where they wanted to be coming up to the half-time whistle.

Unwilling to enter the dressing room level, Arles-Killeen piled on the pressure in the closing minutes in the half. Jason Enright grabbed his second of the day three minutes before the break, before Paul Kingston came to the fore once again to fire two superb points, the second of which came from a wildly acute angle, to send Killeen in three points clear at the interval.

In a half where Killeen’s envious midfield of Donie Kingston and Jason Enright were fought tooth-and-nail for every ball by the Heath’s Ciaran Booth and Shane Carroll, the midfield battle and The Heath’s tight defence were proving to be major factors in the game.

Like he had done from the throw-in in the first half, Donie Kingston attacked from the get-go resulting in a white flag on this occasion as Killeen went four points clear early on. Arles-Killeen continued to pull the strings early on with Enright and Shane Julian splitting the posts too, before Paul Kingston forced a superb save from Joe Walshe only to see his rebounded shot come back off the crossbar.

The Heath found their feet for the half ten minutes in with Chris Bergin opening his account, followed by Shane Carroll’s curling effort to cut the Arles-Killeen advantage to four points with nearly twenty minutes left to play.

With a quarter of an hour left to play, Paul Kingston and Jason Enright combined resulting in Enright’s fourth of the day to extend their lead to five, but Chris Bergin found his range to cut it back to a four point game. Arles-Killeen looked to have put the result beyond doubt when Brendan O’Shea played-in Billy O’Loughlin for the first goal of the day, but Chris Bergin’s composed finish less than a minute later annulled O’Loughlin’s effort.