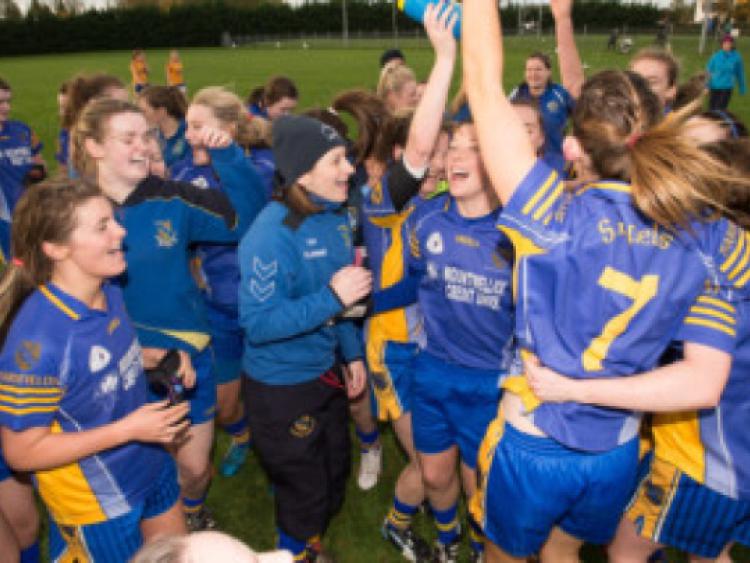 A superbly taken goal in the first-half from Meaghan Dunne and a run of three unanswered points in a five minute spell in the second-half were crucial as Sarsfields successfully defended their Leinster Senior Club title in Clane on Sunday.

A superbly taken goal in the first-half from Meaghan Dunne and a run of three unanswered points in a five minute spell in the second-half were crucial as Sarsfields successfully defended their Leinster Senior Club title in Clane on Sunday.

In a tight game where scores were at a premium, the performance of the Sarsfields defence was also key as they put in an outstanding display limiting their opponents to just eight scores with 1-1 of that total coming in injury-time. Despite conceding those late scores that saw Na Fianna rapidly close a six point deficit to just two, Sarsfields deservedly held on for the win that sees them once again into the All Ireland series where they will face Mourneabbey of Cork in a fortnight’s time.

While Tracey Lawlor deservedly picked up the Player of the Game award for her superb display, including several pressure relieving runs from the back, there were a number of strong performances on the Sarsfields side. Alsion McEvoy was the pick of an impressive defensive bunch while Laura Marie Maher and Meaghan Dunne were a constant threat. Another key for Sarsfields were the performances of substitutes Rachel Williams and Claire Conlon when they entered the fray showing the strength in depth available to manager Alan George.

For Na Fianna, Orlagh Egan was outstanding in attack while Lucy Collins covered vast amounts of ground in the middle of the field. Muireann O’Gorman was also a threat in attack but the threat she posed was removed by her own management who for some strange reason saw fit to move her to corner-back late in the game when they desperately needed scores.

After storming through the championship in Laois and cruising past Killoe in their first game in Leinster, Sarsfields new they were in for a much tougher examination against the Dublin champions.

Both sides played a contrasting style with Sarsfields carrying the ball forward while Na Fianna were content to play on the break with their forwards running into space as the ball was played forward quickly.

They almost opened up the Sarsfields defence after just three minutes but the impressive Alison McEvoy got back on the line to block a shot from Aoife Nolan.

With both defences on top in the early stages, Sarsfields eventually opened the scoring after ten minutes when Ciara Burke slotted the ball over the bar. Orlagh Egan responded with a free for Na Fianna and the Dublin side once again threatened the Sarsfields goal but Jenny McEvoy got an important deflection on a shot from Muireann O’Gorman.

Scores were hard to come by but the game was blown open with 19 minutes on the clock when a surging run by Tracey Lawlor opened up the Na Fianna defence. After playing a precise one-two with Lorna O’Sullivan, Lawlor played a deft pass to Meaghan Dunne who blasted an unstoppable shot to the roof of the net.

They almost scored a second goal soon after but Na Fianna managed to scramble the ball clear off their own line.

A second pointed free for Orlagh Egan reduced the gap to two but a fine score from Ciara Burke and a pointed from Tracey Lawlor put Sarsfields into a four point lead. Na Fianna had a third goal chance late in the half but once again they were bottled up by the very well marshalled Sarsfields defence. Orlagh Egan did reduce the gap to three with her third point of the half but Sarsfields were still in a strong position at the interval having played with the swirling wind behind them.

A point from Alma O’Donnell early in the second-half for Na Fianna briefly reduced the gap to two points once again but for the next 20 minutes, Sarsfields took control of the game. Na Fianna rarely got out of their own half while Sarsfields added three crucial points without reply that put daylgiht between the sides.

They almost added a second goal when a sublime pass from Clare Conlon fell perfectly into the arms of Laura Marie Maher but her shot was well saved by Sorcha Turnbull. The movement of Maher, Meaghan Dunne and substitutes Conlon and Rachel Williams combined with the powerful running of Tracey Lawlor created huge difficulties for the Na Fianna defence and two frees from Lawlor and a point from Maher put Sarsfields 1-6 to 0-4 ahead. They missed a host of other scoring opportunities that, had they taken them, would have put the game well beyond their Dublin opponents.

As it was, Sarsfields managed to extend their lead to six entering the closing minutes after points from Tracey Lawlor (2) and Laura Peake with Nadine Doherty and Orlagh Egan replying for Na Fianna.

With two minutes to go, Na Fianna were reduced to 14 players when midfielder Lucy Collins was sin-binned for persistent fouling and that should have been that.

However the Dublin side, Leinster champions themselves in 2011, refused to throw in the towel and after a point from Ciara McDermott, the ever dangerous Orlagh Egan brought her total to 1-4 with a well taken goal.

Thankfully for the Laois champions, there was no further drama as they saw out the game to retain their Leinster title.