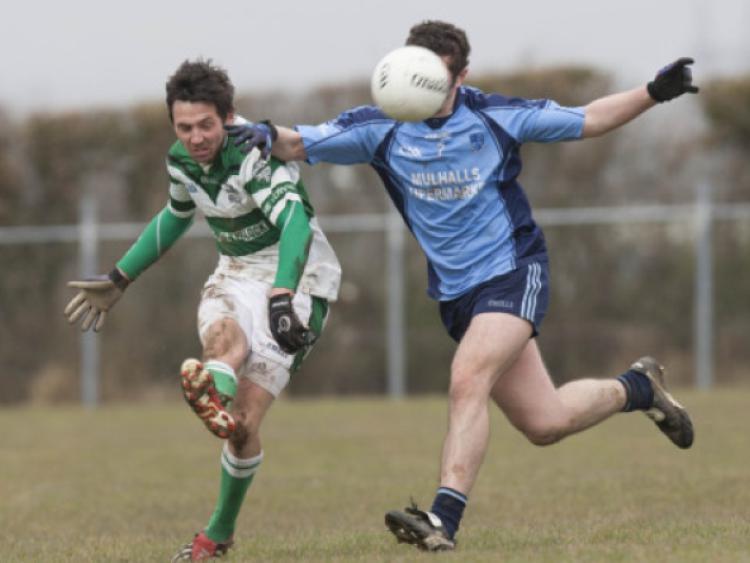 In what was a busy weekend with six games taking place in Division 1, Arles-Killeen, Ballyroan Abbey, O’Dempsey’s and Emo all recorded wins, while St Joseph’s and Timahoe split the points, and the Arles-Kilcruise and Graiguecullen match was abandoned due to injury.

In what was a busy weekend with six games taking place in Division 1, Arles-Killeen, Ballyroan Abbey, O’Dempsey’s and Emo all recorded wins, while St Joseph’s and Timahoe split the points, and the Arles-Kilcruise and Graiguecullen match was abandoned due to injury.

Arles-Killeen racked up their second consecutive big victory with a twelve point win over Crettyard on Saturday evening. Straight off the back of their sixteen point rout over Timahoe, Arles-Killeen are looking to be the in-form team in the county thus far.

Paul Kingston led the scoring charts for Killeen last weekend with a tally of 1-2, while Brian McDonald and Sean O’Shea grabbed 1-1 each, Conor Keightley and Donie Brennan three points apiece, and Donie Kingston a point to complete the scoring as Killeen ran rampant.

Crettyard were aided by Paul Delaney who scored 1-1, Cristoir Maher fored a brace, and Eoin O’Shea and Jimmy Brennan picked up a point apiece as Crettyard slumped to a twelve point defeat.

In Saturday’s second game, there was nothing to separate St Joseph’s and Timahoe when they came to blows in Kellyville with the score finishing up at 1-8 apiece.

Playing against the wind in the opening half, Timahoe found themselves 1-1 to no score ahead early on following a Colm Lalor goal, and a point from Padraig Clancy to set them on their way.

St Joseph’s quickly set about rectifying the score with Colin Campion opening their account shortly after with a fine point. James Doyle was fouled in the square leaving referee Joe Brennan with no choice but to award a penalty. Having won the penalty Doyle stepped up to take it, and the Joseph’s man made no mistake with the kick to level the proceedings.

Points followed from Doyle (3) and Kevin Campion to push Joseph’s ahead going in at the break as they led on a scoreline of 1-5 to 1-1. Mick Byrne restarted the scoring with a point to send Joseph’s five points clear, before a brace of points from Clancy and a point from Brendan Quigley closed the gap to two points with twenty minutes left to play.

Jason Campion landed two points in as many minutes to restore a four point cushion for Joseph’s, before Sean Ramsbottom fired two points to bring it back to halve the deficit. Clancy fired his fourth point of the day to bring it to the minimum, before Ruairi O’Connor leveled the game at 1-8 apiece - and that’s how it finished as they split the honours.

In the other games played, Graiguecullen’s clash with Arles-Kilcruise was abandoned after a Graigue player suffered a neck injury, and an ambulance was called as a precauionary measure.

Emo had a mixed couple of days also, as they lost to Portlaoise last Thursday night on a scoreline of 4-8 to 0-12, but bounced back over the weekend to seal a 1-12 to 1-8 win over Stradbally.