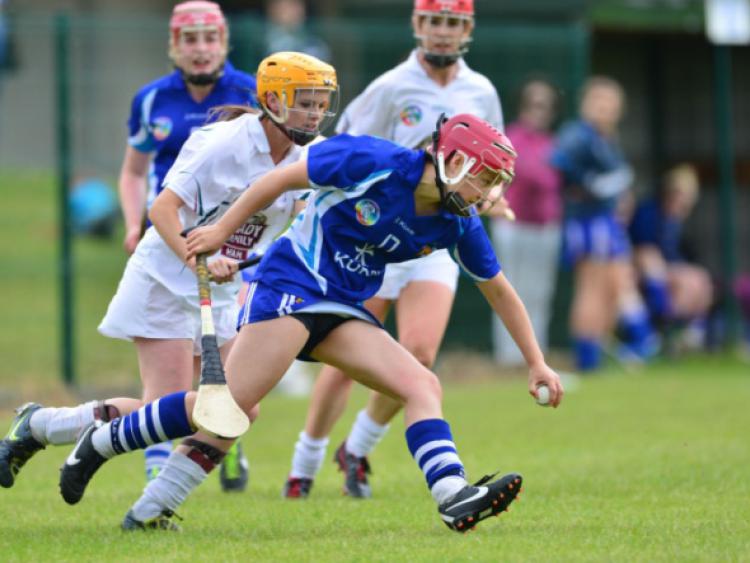 After a disappointing defeat at the hands of Kildare in the Leinster final two weeks previous, the Laois Camogie team were set to play them again in the first round of the Liberty Insurance All Ireland Championship in Naas GAA grounds.

Sporting their new Jerseys from their new sponsors Kukri Sports, Laois went out to reverse their fortunes from the Leinster Final.

For the first ten minutes, it looked like Kildare were set to repeat their win over this Laois side as they scored three points in succession.

However, Elaine Mahony got Laois on the scoreboard on the tenth minute, and that was followed by Sarah Cuddy two minutes later.

Kildare’s freetaker Siobhan Hurley scored her second point on the 14th minute before Olga Parkinson scored a point for Laois. Kildare pulled ahead again, scoring the next four points in a row.

Then with a three minute purple patch, Laois scored three goals in as many minutes. The first was scored by Olga Parkinson after Sarah Cuddy laid off a great pass to set her up.

The second was scored by Niamh Dollard from 30 meters out, as the Kildare goalkeeper fumbled the sliotar whilst under pressure from Sarah Cuddy. The third was yet again set up by Niamh Dollard and finished with a flick into the net by Eimear Delaney.

Laois were ahead by four points in the closing stages of the first half when Kildares Siobhan Hurley closed the gap by one from a free. Half time score Laois 3-3, Kildare 0-9.

The second half saw Louise Mahony get more into the match and despite carrying an injury, she scored five of Laois’ six second half points, with Sinead Lanham scoring the sixth. In the meantime Kildare scored three points.

Laois manager Mattie Collier introduced Rosemary Bermingham and Joyce Dunne for Sarah Cuddy and Sinead Lanham on the 55th minute to strengthen the defence and hold the lead, but Kildare sub Emma Barry still managed to breach the Laois defence and scored a goal on the 58th minute. It was too little to late for the Leinster champions however as a delighted and deserving Laois came out on top at full time with three points to spare.