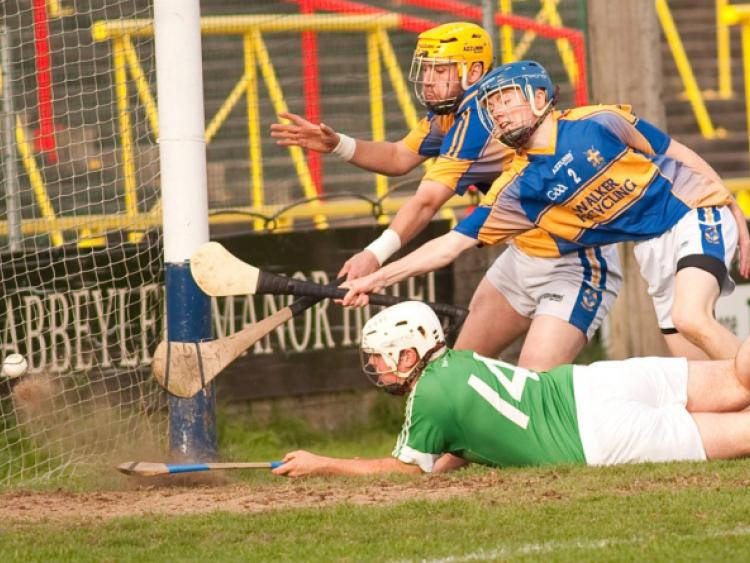 Colt were the surprise victims in the SHC ‘B’ quarter-finals over the weekend as Rosenallis booked their place in the last four at the expense of the Raheen men.

Colt were the surprise victims in the SHC ‘B’ quarter-finals over the weekend as Rosenallis booked their place in the last four at the expense of the Raheen men.

Having won the Division 1B league title earlier this year year, Colt were one of the favourites for this SHC’B’ title, but two opportunistic goals from Rosenallis early in the second half proved to be the difference.

In what was a poor game overall, those two goals were always going to prove to be massive scores. Colt had major troubles themselves in front of goal, as they ended with just nine points.

Rosenallis can look forward to the semi-finals now but they will know that an improvement is needed, whoever they end up meeting in the last four.

They too need to improve in front of goal, as both their goals came from Colt mistakes, and outside of those, they managed just three points from play.

To win and play badly isn’t the worse problem to have though, and they can get back to the training pitch and work on whatever problems they have ahead of the semi-finals .

They got off to the better start here too, as Ronan Murray floated over a free in the second minute to see Rosenallis draw first blood.

Colt were playing into a stiff breeze in the opening half, and they struggled to find the target early on. Rosenallis pressed ahead with a point from midfielder JJ Smith, but they too started to struggle in front of goal, as both teams hit a string of poor wides.

It was Colt who finally broke the run, as they got their first score with a pointed free from Colm Kavanagh. They should have had a goal moments later, as Dan Dalton played Shane Mullins in on the Rosenallis goal, but their ‘keeper Dillon Creagh managed to get a hurl to his shot and deflect it over the bar for a point.

Another free from Colm Kavanagh made it three in a row for Colt, who were starting to find a bit of form now, and they took a one-point lead. It didn’t last too long though, with Ronan Murray pointing his second free to tie the game at 0-3 each, but his touch from placed balls deserted him for a few minutes as he missed two scoreable efforts.

He rediscovered it three minutes before half-time when he pointed from the left wing after Declan Walsh had been fouled, but a fine score from Tony Ryan in the last minute of the half meant the teams trudged off to the dressing rooms tied at 0-4 each.

Chris Murray gave Colt an ideal start to the second half, as he made a great run up from his position at centre-back to fire over from the left wing.

Three minuts later, hoever, Rosenallis would have the ball in the back of the net. A ball into the square by Simon Smith saw Colt goalkeeper Brian McDermott fail to control the ball, and it fell kindly for Declan Walsh, who was left with the simplest of tasks to scoop it into the net from a two yards out.

Ronan Murray added a free soon after and then Rosenallis had the ball in the back of the net for a second time. McDermott tried to control a ball into the square with his hurl rather than catch it, and Rosenallis quickly applied pressure on the Colt stopper. The ball then broke free for Niall Doolan to sweep home from 10 yards out.

Those goals rocked Colt and they never looked like they would launch a meaningful comeback.

Dan Dalton had a chance for a goal in the 43rd minute, but his powerful shot flew inches over the crossbar. Chris Murray saw a similar effort fly over Dillon Creagh’s crossbar with four mintues remaining, and Colt knew by now that the game was over.

They finished with a couple of points, but Rosenallis held on for a deserved win and a place in the semis.