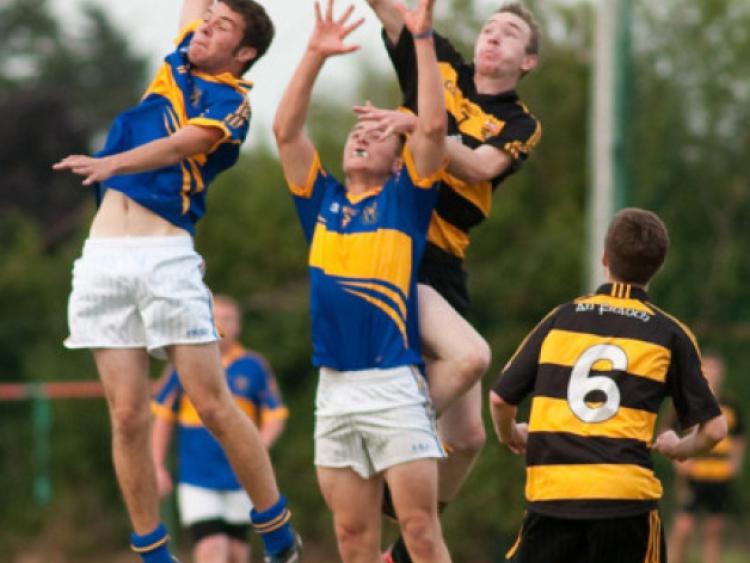 A superb second half display from The Heath proved more than enough to overcome the challenge of O’Dempsey’s to last Wednesday night.

A superb second half display from The Heath proved more than enough to overcome the challenge of O’Dempsey’s to last Wednesday night.

In what was a lackluster opening fifteen minutes, O’Dempsey’s led by four points to one thanks to scores from Matthew Finlay (2), Cathal Meade and Darragh Bannon, while Evin Keane claimed The Heath’s only point.

The Heath gradually gained a footing in the game and tacked on three consecutive points through Evin Keane (2) and Sean Mulhall to level the proceedings after twenty minutes of play.

The second half proved to be much less of a contest as The Heath simply steamrolled the opposition. Evin Keane restarted the scoring with just thirty seconds elapsed in the half to level the game, before Matthew Finlay edged O’Dempsey’s in front once again.

Evin Keane and James Phelan added points for The Heath to see them lead, but it didn’t last long as O’Dempsey’s regained the lead thanks to a Darragh Bannon goal.

Robbie Dowling and Keith Kavanagh exchanged points to keep the gap at one, before The Heath went on a scoring rampage. In a ten minute period, The Heath added eight points to the scoreboard, with Evin Keane claiming the pick of the bunch.

O’Dempsey’s tried to keep in touch with points from Matthew Finlay, but The Heath’s scoring spree continued and an injury time goal from James Phelan proved to be the icing on the cake.