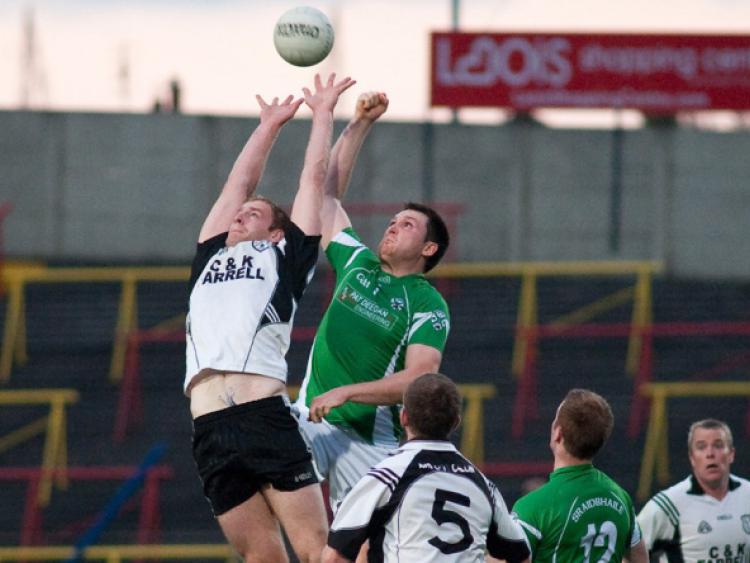 Two goals in the first-half from midfielders Jason Enright and Donal Kingston proved to be the decisive scores as Arles-Killen advanced to the quarter-finals after an at times ill-tempered encounter with Stradbally.

Two goals in the first-half from midfielders Jason Enright and Donal Kingston proved to be the decisive scores as Arles-Killen advanced to the quarter-finals after an at times ill-tempered encounter with Stradbally.

Jason Enright’s goal after 23 seconds set the tone while Donal Kingston’s after 21 minutes put five between the sides and set Arles-Killeen on course for a comfortable victory. They now go through to the quarter-final while Stradbally face a tricky tie with The Heath.

Almost from the throw-in there was an undercurrent to the game and it flared up regularly a couple of incidents with several players from both sides involved in melees. Nobody could have faulted referee David Moore if he had flashed the red card but he chose to keep it in his pocket which was lucky for some of the players involved.

On the night Arles-Killeen were the better team and were deserving winners. They were more potent in attack scoring 2-8 from play and the partnership of Jason Enright and Donal Kingston held sway in midfield while also scoring 2-5 between them. Defensively Arles-Killeen closed Stradbally down well allowing just three points from play while 1-2 of Stradbally’s total came in the last five minutes when the game was well beyond them.

Worryingly for Stradbally, key player, Colm Kelly, did not finish the game as he went down in considerable pain after taking the penalty. He did not return for the closing minutes. If he is not fit for the game with The Heath, it will leave a gaping hole for the management to fill in the heart of the attack.

The tone for the game was set within 23 seconds of the throw-in when Arles-Killeen marched down the field and Donal Brennan and Paul Kingston combine to put the on-rushing Jason Enright through and the full-forward made no mistake with his finish to the back of the net.

Tom Shiels pulled on back for Stradbally from a ‘45 but Arles-Killeen answered with points from Paul Kingston and Donal Kingston to lead by 1-2 to 0-1 after seven minutes.

Stradbally enjoyed their best period of the game for the next 14 minutes adding two points from Tom Shiels and Conor Delaney while keeping Killeen scoreless. It could have been even better for them but Colin Beale’s shot was well saved by Michael Leigh in the Killeen goal.

That save kept Killeen in front and they took full advantage ending a near 15 minute scoring drought with to a quick-fire 1-3 to put daylight between the sides.

A long free in from Jason Enright was met by a perfectly timed run close to goal from Donal Kingston and he got the vital touch to send the ball into the net. Points from Enright, Donal brennan and Shane Julian followed with Colm Kelly pulling one back for Stradbally on the half-time whistle.

That left Killeen 2-5 to 0-4 ahead and they maintained that advantage in the opening ten minutes of the second period with points from Donal Brennan and Brian McDonald cancelling out frees from Tom Shiels and Colm Kelly. Stradbally almost got back into the game with 41 minutes on the clock when Padraig Langton got through on goal but again Michael Leigh got across to make the save.

As they did in the first-half, Arles-Killeen responded well to the heroics of their ‘keeper rattling off the next five points to remove any doubt over the outcome of the game. Three frees from Jason Enright and two points from Sean O’Shea put 12 points between the sides. Stradbally did score 1-2 late in the game through Tom Shiels, Paul Begley and a Colm Kelly goal from the penalty spot, but they were little more than consolation scores as Arles-Killeen cruised through to the quarter-final with a second impressive win where they totalled 18 points.