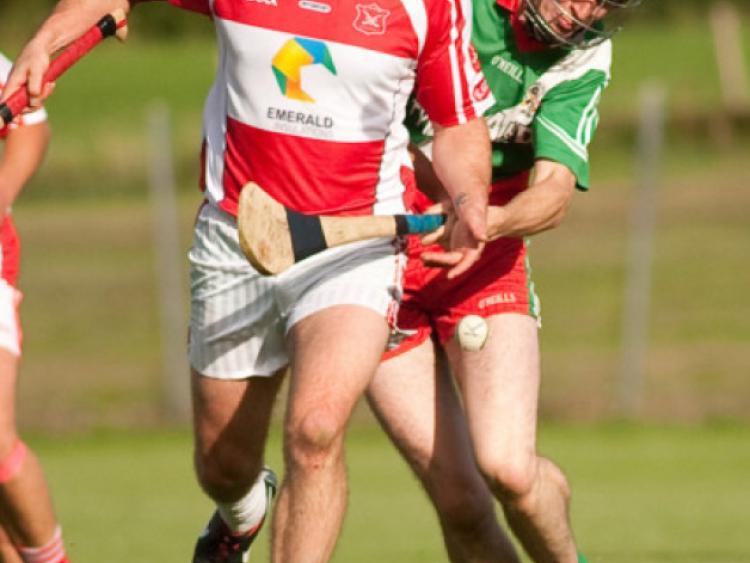 Despite both sides racking up the same amount of scores, it was Mountrath who maintained their Senior B status after a thrilling extra-time win over a Borris-Kilcotton side who failed to find the goals required to keep in touch in Saturday evening’s relegation decider in Raheen.

Despite both sides racking up the same amount of scores, it was Mountrath who maintained their Senior B status after a thrilling extra-time win over a Borris-Kilcotton side who failed to find the goals required to keep in touch in Saturday evening’s relegation decider in Raheen.

Borris Kilcotton kept in touch throughout, thanks chiefly to the dead-ball expertise of Daire Quinlan who notched thirteen points, but Mountrath pulled away in the second period of extra time to avoid the drop to the Intermediate ranks.

In the opening half hour it was Borris Kilcotton who looked slightly the hungrier side, and only a fortuitous early Fionan Comerford goal and a neat strike from fellow corner-forward Matty Rice near the end of the half kept Mountrath on terms at the interval on a 0-9 to 2-3 scoreline. Quinlan hit six of Borris’ nine from frees, with Bill Meade, Frankie Cullinane and John Wall scoring the three from play with Mountrath’s discipline in the tackle coming under intense scrutiny from referee Anthony Costigan.

There was no signs of that improving after the restart, and when Daire Quinlan sent three more over the bar in the first six minutes Borris looked to be seizing control. However, Dan Russell’s free cut the lead to two and a minute later Mountrath fired their third goal to steal the lead back. Kevin O’Keefe’s searching ball in sent Fionan Comerford clean in on goal and he side-stepped Enda Fitzpatrick to bag his second goal of the game.

For the last fifteen of regulation time Mountrath’s one point lead was pegged back on five separate occasions, and restored just as quickly, and when a needless foul allowed Brian Russell to put two between the sides, Borris looked to have blown their chances. However, they hit back with two last gasp scores to send the tie into extra-time.  Frankie Cullinane swiped over the first with a neat effort and deep in stoppage time a superb Frankie Wall point on the turn saved their bacon.

It would prove however to be a temporary reprieve. The first ten minute period saw Mountrath stamp their authority over a Borris Kilcotton side that looked to be wilting. Two Dan Russell scores and one from Colm Lanham at one end was answered by a sole effort from Rory Moore at the other to leave St Fintans two points to the good at the end of the first period, and just over a minute into the second, Mountrath’s fourth goal signalled the end of the tit-for-tat pattern that had been the norm throughout.

Matty Rice gathered a Brian Russell handpass to bear down on goal and his strike arrowed into the top right hand corner of the net to sink the battling Borris men. Two Daire Quinlan frees were bettered by three from Brian Russell and a late Aidan Lenihan score but it was Rice and Comerford’s goals that decided the tie.