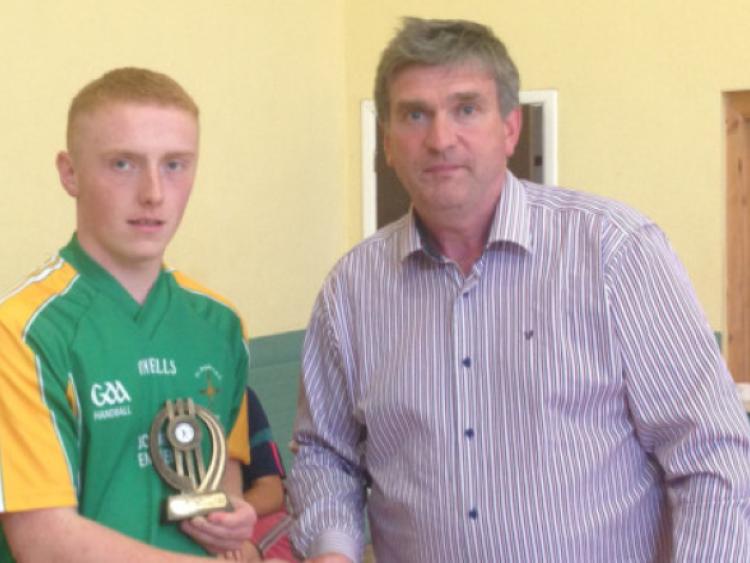 Last Sunday, the Laois One-Wall handball tournament was held in the newly opened one-wall court in Cullohill. The tournament proved a huge success with a number of highly competitive and entertaining games on the day.

Last Sunday, the Laois One-Wall handball tournament was held in the newly opened one-wall court in Cullohill. The tournament proved a huge success with a number of highly competitive and entertaining games on the day.

In the first match of the tournament, Andrew Dowling faced Ray Fogarty. Andrew was to make a fast start building up a 12-3 lead. With games only 15 minutes in length, it left Ray Fogarty with an uphill battle to reel in the deficit. Despite a brave fight back, Andrew progressed on a scoreline of 19-13. In the second quarter-final, Michael Donovan faced Tómas Lennon. Tómas was to play the superior handball progressing to the semi-finals on a scoreline of 23-11.

The first semi-final saw Andrew Dowling play Peter Whelan. This proved a tight affair with never more than a couple of aces between the two players. With less than ten seconds to go Andrew trailed by a single ace but remarkably pulled off a breathtaking recovery to take the game to sudden-death with the pair finishing 18 aces apiece. The sudden death tie-breaker proved equally as close with Andrew eventually edging it 5-4.

The second semi-final was to be another compelling affair with Tómas Lennon facing Paddy Donovan. Tómas made a bright start to the tie building up a five ace lead. However, Paddy was to show his experience in staging a fight back. With a minute to go only an ace separated the two men. With the game now on a knife edge it was Tómas who won the next two aces taking the encounter 20-17.

The county final was to prove a gripping encounter. Both players played superb handball with very little separating either man. After ten minutes of play Tómas led by only a single ace. With a minute to go, Tómas had extended his lead by another two aces but Andrew wasn’t finished winning the next three aces leaving the game tied with twenty seconds remaining. Despite the intense pressure, Tómas maintained his composure to win the deciding ace and capture the county one-wall title on a scoreline of 16-15.

The B tournament final saw two of Laois’ brightest underage talents come face-to-face. After disposing of Eddie Dunne and Mick Fogarty in her previous two games, Niamh Dunne went into her final against David Mulhall confident of staging an upset. David had also been in impressive form when defeating David Doheny in his semi-final.

In the final, David was to make the better start building up an early seven ace lead. The under 17 All-Ireland girl’s champion showed plenty of her battling qualities to stay in the game reducing David’s lead to only four aces with five minutes to go. Despite Niamh’s best efforts, David finished the game stronger and took the title on a score-line of 22-10.