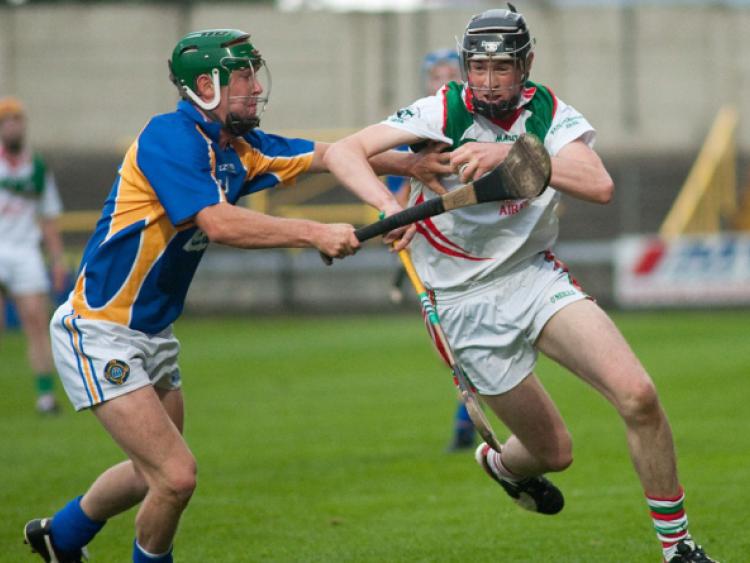 Rathdowney-Errill and Clough-Ballacolla played out one of the best games the county has ever seen last Sunday night, as it ended all square in O’Moore Park.

Rathdowney-Errill and Clough-Ballacolla played out one of the best games the county has ever seen last Sunday night, as it ended all square in O’Moore Park.

The teams will have to meet again this Saturday afternoon, and that’ll be just fine for anyone who witnessed this game. From the first minute to the last the game was played at a ferocious pace, and it only whets the appetite for when the teams meet again.

From defending to attacking, both teams produced some outstanding play over the course of the hour. Scores rained in from all distances and angles, and every score had to be worked for, as the intensity of the defending and tackling was incredible.

If there is a better club game played anywhere in the country this year you’ll be lucky to see it, and going on past meetings, the teams should pick up from where they left off this weekend.

The first score of the game came from a John A Delaney free in the first minute, and play took off from there. Darren King responded in a matter of seconds, and that sparked a flurry of Rathdowney scores.

Brian Campion added a free and then Darren and Ross King added a point apiece as the champions went 0-4 to 0-1 ahead after just five minutes.

Clough-Ballacolla took their time to get going, but they burst into the game in the sixth minute. After Willie Hyland pointed a free, Stephen Maher then played a wonderful cross-field ball to an unmarked Willie Dunphy, and he shot low to the bottom corner.

A little over a minute later, Ballacolla won a 21 yard free and Willie Hyland stepped up to thump the ball to the net, as Ballacolla took a 2-2 to 0-4 lead. Picky Maher added another point before Rathdowney began to wrestle back control of the game.

Darren King and Brian Campion pointed frees before King added another from play as Rathdowney hauled themselves level at 0-10 to 2-4 by the 18th minute.

A quick exchange of points kept the teams level before Rathdowney found another gear, starting with two points from Darren King, one of which should have been a goal as he was put straight through.

Ross King added another soon after before Owen Houlihan’s clever hand pass set Shane Dollard up for a point from 40 yards. Things were going Rathdowney’s way now and they pressed home their advantage, as they struck for a goal.

Good pressure from John Purcell on Danny Hanlon almost saw him block the ball down and almost score a goal himself, but Ross King won possession and fired to the back of the net.

Willie Hyland scored a late free for Ballacolla but Rathdowney had the advantage at half time as they lead 1-15 to 2-7.

Clough-Ballacolla needed to get off to a good start in the second half to eat into Rathdowney-Errill’s lead, and they did just that as Willie Hyland pointed twice in the opening two minutes to give them a much-needed shot in the arm.

Rathdowney-Errill hit back with a free from Darren King, but the Clough-Ballacolla comeback had started by now and they were reeling Rathdowney in with each passing minute.

Midway through the half they were back within one thanks to Willie Hyland (free), and then Aidan Corby and Stephen maher pointed to put them ahead.

Rathdowney-Errill responded like champions, getting themselves level within a minute through John Purcell, and there would be no separating them before the final whistle.

Enda Meagher put Rathdowney ahead with four minutes left, but Stephen Maher levelled it up again and sent the teams to a replay once again.