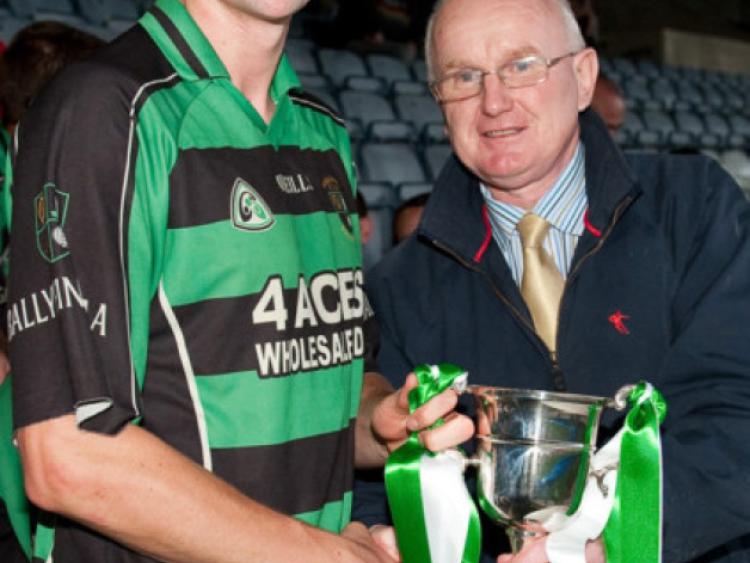 Ballyfin produced a dominant second half performance last Friday night to claim the Division 3 league title at the expense of Stradbally in O’Moore Park.

Ballyfin produced a dominant second half performance last Friday night to claim the Division 3 league title at the expense of Stradbally in O’Moore Park.

In a disappointing game overall, Ballyfin produced some wonderful football in the second half to deservedly take the title, despite playing the entire second half with 14 men.

There were times where you had to wonder which of the sides had the extra man, as Ballyfin adapted to the situation much better than Stradbally did. Ricky Quillinan was the one given his marching orders, as he was shown a straight red for an off-the-ball incident in first-half injury time.

It looked like it would be a major blow to Ballyfin’s hopes of claiming the win, as Quillinan was their major attacking threat in the first half, as he scored 1-3 from play.

With wind advantage in the second half, however, Ballyfin made light of his absence, as they played smart and worked scores whenever they needed them.

They can bring the confidence from this win into the rest of the championship season, while Stradbally must overcome this result quickly as they are still in with a chance of wining the JFC ‘A’ title.

They weren’t at their best here though, and even with wind advantage in the first half they struggled to impose themselves on the game. Jody Dillon gave them an early lead with a point from play, but Quillinan quickly got Ballyfin back on level terms when he fisted over a point from a tight angle.

Ballyfin almost had a goal soon after when Cathal Brophy’s effort was saved, but in the ensuing battle for possession from the rebound, Ballyfin won a free which James Finn pointed.

A goal wasn’t far away, hoever, and midway through the first half good work from Richard Downey set Rickie Quillinan up, and he made no mistake to open up a 1-2 to 0-1 lead.

Jody Dillon (45) and Quillinan traded points before both teams missed glorious goal chances, with Cathal Brophy guilty for Ballyfin and Dillon off target for Stradbally.

Eoin Buggie and Dillon added points for Stradbally though, but the half would end in some controversy. A long ball into Rickie Quillinan found him in space and his marker prone on the ground, and while Quillinan scored a point, he was subsequently sent off after David Murphy consulted with his umpires.

That left it 1-4 to 0-4 at half time, and it remained to be seen if being a man down would negate having wind advantage for Ballyfin.

As it turned out, it made no difference whatsoever.Stradbally got the first score of the half in the sixth minute, through Gary Comerford, but it was all Ballyfin after that.

James Finn picked out Cathal Brophy with a long ball and he did well to win possession under pressure and point from 25 yards out.

A minute later it was the turn of George Lanham to get on the scoresheet, as he made a great burst down the right wing before composinghimself and scoring a wonderful point.

With their tails up, Ballyfin kept pouring forward as Stradbally struggled against the waves of attacks, and two points in the space of a minute all but wrapped up the game.

Louis Duff and Cathal Brophy pointed in quick succession as Ballyfin went 1-8 to 0-5 ahead, and Stradbally didn’t look like they had a response in them.

Ballyifn added another two point before the end to go eight ahead, with Gary Comerford powering home a late goal for Stradbally to give them some consolation.