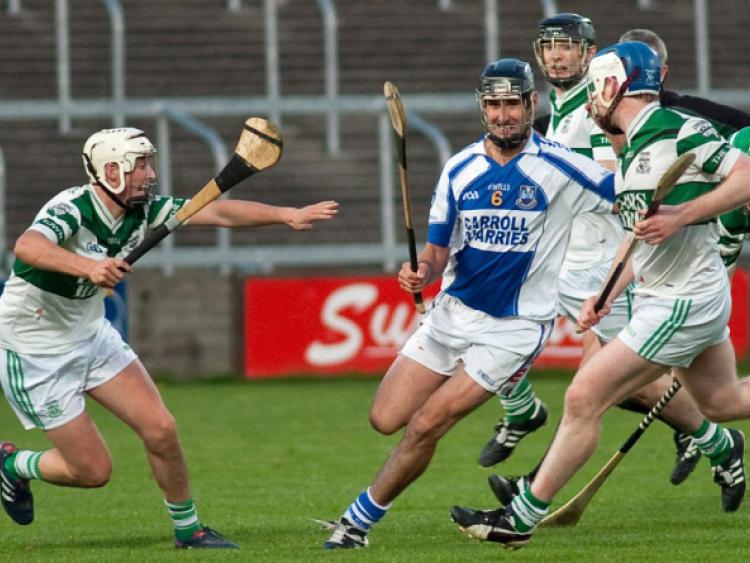 Portlaoise bounced back from defeat against Camross to score a comprehensive victory over Castletown-Slieve Bloom in O’Moore Park on Saturday night.

Portlaoise bounced back from defeat against Camross to score a comprehensive victory over Castletown-Slieve Bloom in O’Moore Park on Saturday night.

A dominant second half performance after a nervy first period built the platform for Portlaoise to ease their way into the semi-finals of the Laois SHC. Going into the break 1-3 to 0-5 down, seven unanswered scores between the thirty fifth and fifty fourth minutes, including two goals, put the villagers to the sword, as Portlaoise ran out easy winners.

Portlaois were two points to the good within the first three minutes, a Noel Costelloe free and a Barry Fitzgerald effort getting the Town off to a strong start.

The importance of the game to both sides was very evident in the early stages, and skirmishes broke out between the sides all over the pitch during the first few minutes as the players got to know each other.

When things settled down it was Castletown-Slieve Bloom who were first to make an impression on the game. Ben Conroy got the men in blue and white on the scoreboard with and eleventh minute free, but scores would prove to be hard come by in the first period.

Portlaoise’s Eoin Costello hit an excellent forty yard effort on the quarter hour which was followed by Barry Fitzgerald’s second to give the town a 0-4 to 0-1 lead.

Castletown-Slieve Bloom responded with an unanswered brace of their own, veteran David Cuddy and a Seamus Lyons free narrowing the gap to two. The first green flag of proceedings was then raised in the 29th minute.

Castletown-Slieve Bloom’s Ben Conroy struck a 60 yard free in the dying seconds of the opening period, and in an attempt to deflect the sliotar over the bar, Portlaoise net minder Colm Clear inadvertently steered the ball into his own net seeing the villagers go to the break a point to the good, 1-3 to 0-5.

Castletown-Slieve Bloom were first to register in the second half, with Ben Conroy flashing over from thirty yards. Conroy was on hand to convert a 30 yard free a minute later after a foul on James Hooban, however the villagers wouldn’t trouble the score keeper again for another 20 minutes.

By the time they did Portlaois had hit 2-5 and ended the game as a competition. An excellent score from Portlaoise half-back Derek Delaney got this decisive scoring period underway, and the increasingly influential Barry Fitzgerald hit two points back to back in the space of two minutes, before he then raised Portlaoise’s first green flag two minutes later.

Tommy Fitzgerald found Noel Costelloe whose shot was charged down by the Castletown-Slieve Bloom rearguard. Barry Fitzgerald grabbed the rebound and dispatched from 15 yards.

Points from Tony Byrne and the impressive Noel Costelloe were further nails in the Castletown-Slieve Bloom coffin. Costelloe had the ball in the back of the net for Portlaoise with 15 minutes to go, and that score all but ended the game in competitive terms.

Tommy Fitzgerald was again instrumental to the build-up, finding Costelloe unmarked, and he flashed home a powerful shot, leaving the scoreboard reading 2-10 to 1-5.

Portlaoise wing-back Darragh Duggan was next to get in on the scoring act with an excellent thirty yard effort. Castletown-Slieve Bloom’s Seamus Lyons broke the Portlaois scoring chain with a fifty third minute free.

Portlaoise were in no mood for mercy however, hitting the final four points of the game including three from substitute Dermot Costelloe to secure a comfortable win in the end.