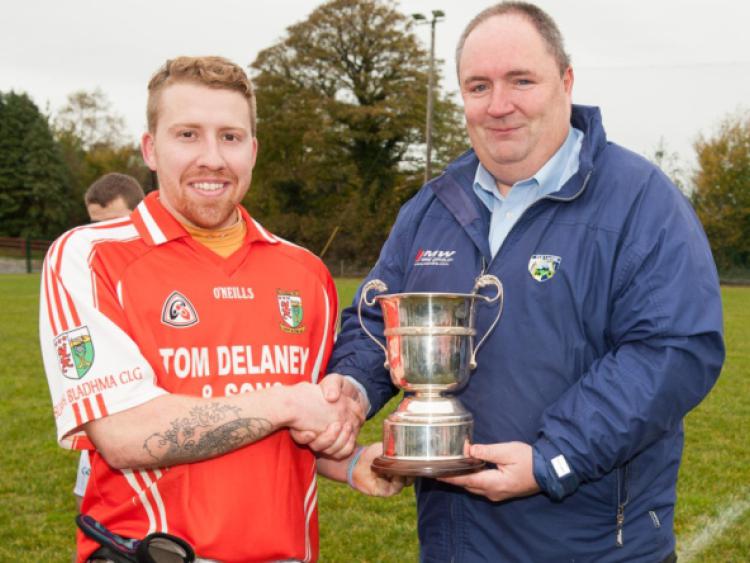 Slieve Bloom-Castletown made it a hat-trick of B titles this year, as they added the U-21 title to their Minor and Junior titles in Rosenallis on Sunday morning.

Slieve Bloom-Castletown made it a hat-trick of B titles this year, as they added the U-21 title to their Minor and Junior titles in Rosenallis on Sunday morning.

Slieve Bloom-Castletown were quick to register the first score of the game when Ben Conroy split the posts with less than a minute on the clock, before he then followed up with a close-range free to open up a two point gap between the sides with only three minutes on the clock.

St Manman’s replied through a superb Niall Corbett free from forty metres, before PJ Fitzpatrick darted through on goal before calmly slotting the ball low past the oncoming keeper to catapult St Manman’s into a two point lead.

St Manman’s responded well with a point from Niall Corbett a minute later, but Slieve Bloom-Castletown went straight back on the attack and claimed their second goal of the day, this time through Ben Conroy to see them take a three point lead with seventeen minutes gone in the game.

Unhappy to enter the dressing room three points down at the break, St Manman’s went on the attack for the final ten minutes of the half and racked up three points through Niall Corbett, PJ Fitzpatrick and Niall Hogan to level the proceedings approaching the half-time whistle.

Ben Conroy rounded off the scoring for the half with his third point of the morning to see Slieve Bloom-Castletown lead by the narrowest of margins at the interval.

Unlike the first half, Slieve Bloom-Castletown dominated for the majority of the second half - despite what the final scoreline may suggest. St Manman’s 1-1 in the final ten minutes polished the final score to an extent, but in truth it was obvious from the fortieth minute what direction the cup would be traveling home.

Slieve Bloom-Castletown opened the second half with two points in as many minutes from Ben Conroy and James Mullaney, with the latter’s being a superb score under-pressure from distance to see them lead by three points.

Slieve Bloom-Castletown continued to dominate the proceedings with Ben Conroy (2) and Mullaney again raising the white flag to set the margin at six points after forty-four minutes of play as St Manman’s struggled to find their footing in the new half.

St Manman’s finally registered their first score in twenty-four minutes when Niall Corbett slotted his fourth free of the day, but a brace of frees two minutes later from man-of-the-match, Ben Conroy, extended the deficit to seven points with eleven minutes left to play.

Clonaslee, St Manman’s sprung Ciaran Hyland from the bench and it didn’t take him long to repay his manager’s faith in him as he split the posts with his first touch of the ball to leave six points separating the sides coming into the final ten minutes of the game.

St Manman’s were to have one last effort to salvage something from the game as Michael Hyland lobbed the ball into the square, with substitute Ciaran Hyland getting a fist to the ball to steer it into the Slieve Bloom-Castletown net, but that was to be as close as they’d come.