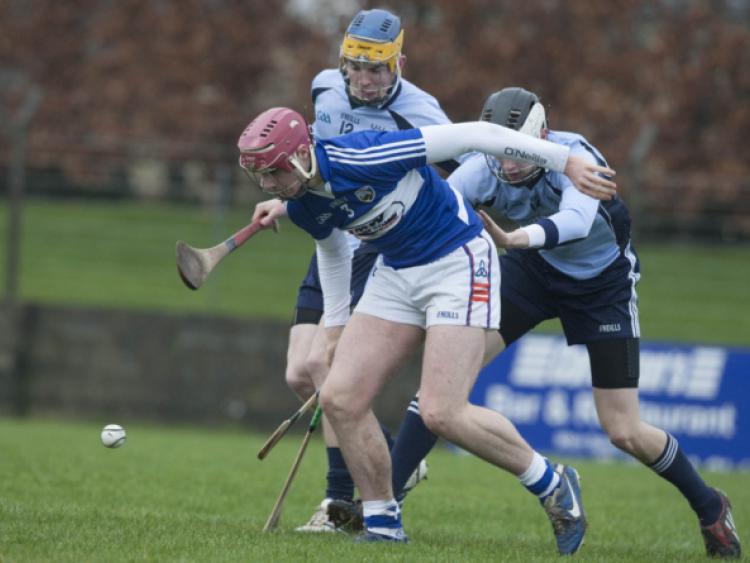 Mark Kavanagh’s eleven point haul on Saturday last paved the way for a comfortable five point victory for Laois Schools over Dublin North in a well-contested game in Rathdowney.

Mark Kavanagh’s eleven point haul on Saturday last paved the way for a comfortable five point victory for Laois Schools over Dublin North in a well-contested game in Rathdowney.

Having dismissed the efforts of Westmeath Schools the week before, Laois Schools came into this game knowing they would be up against a much sterner test in their Dublin counterparts. Playing conditions in Rathdowney were far from ideal and they played a huge factor in the overall tempo of the game with just four of Laois’ thirteen points coming from play.

In his home ground of Kelly O’Daly Park, Mark Kavanagh opened the scoring with his first free of the day after just two minutes. Kavanagh followed up this effort from the resulting puck-out, only for his superb sideline-cut from fifty metres to come back off the upright.

With playing conditions not favouring a fast-paced, open game it was evident that the free-taker role would become even more crucial to the result. Dublin North’s Sean Gray opened his side’s account after seven minutes before slotting a second a minute later to give Dublin North the lead for the first time in the game.

Laois regained the lead minutes after with Kavanagh hitting a brace of close-range frees to put them ahead by the minimum approaching the midpoint of the half. Dublin North replied almost immediately to level the proceedings with Sean Gray hitting his third of the afternoon.

Laois went forward and claimed the next two points, again Kavanagh landing a brace of frees to push his side into a two point lead with ten minutes remaining in the half. An eight minute scoreless period ensued, before Laois broke the deadlock two minutes before the break with Stephen Bergin diving on a loose ball to nudge it over the line and raise the green flag for his first of the day.

Dublin North closed out the half strongly with AJ Murphy and Eoin Conroy raising the white flag to cut the deficit to a single goal going in at the interval. Dublin North restarted the scoring four minutes after the break with corner-forward, Eoin Ó Conghile, slipping his marker and beating Enda Rowland in the Laois goals and level the game once again.

Unfazed by having conceded the goal, Laois went on the attack and racked up a hugely impressive 1-5 in an eight minute blitz on the Dublin defence. Stephen Bergin was on-hand to fire his second goal, Mark Kavanagh added three to his account, while Liam O’Connell and Kevin Bergin registered points as Laois stormed back into the lead.

Dublin North responded well with Sean Ó Riain claiming their second goal in ten minutes to narrow the gap to five points. Mark Kavanagh replied from the next puck out to extend the Laois lead to six points, but an AJ Murphy point two minutes later brought the margin back to five.

Laois’ stand-out performer on the day, Mark Kavanagh, added a further two points to his ever-growing tally in the final five minutes to leave him just shy of a dozen points for the day with an impressive eleven to his name.

Dublin north closed out the game with Eoin Ó Conghile adding a point to leave the final score at 2-13 to 2-8 in favour of the Laois side who will now go on to prepare for a huge test against an in-form Wexford Schools team.