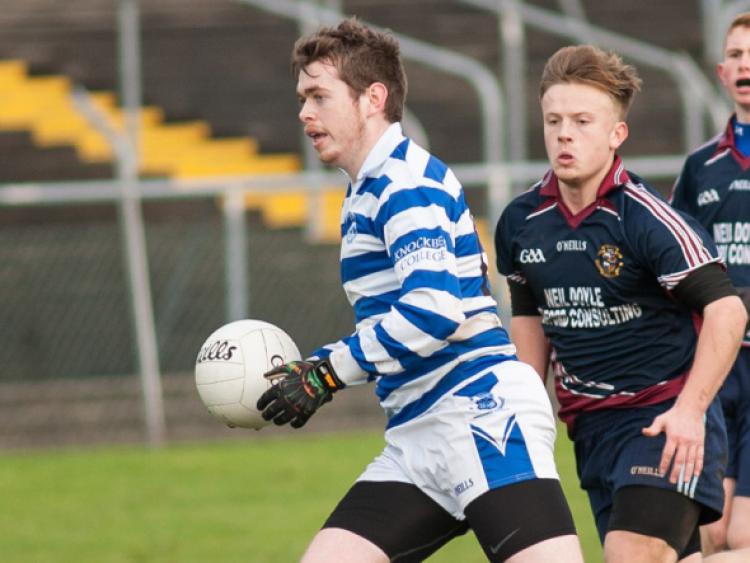 Knockbeg College cruised into the second round of the Leinster Schools Senior Football ‘A’ Championship with an emphatic 16 point win over an overmatched Portmarnock CS on Friday in Dr Cullen Park.

Knockbeg College cruised into the second round of the Leinster Schools Senior Football ‘A’ Championship with an emphatic 16 point win over an overmatched Portmarnock CS on Friday in Dr Cullen Park.

Crettyard’s Cormac Murphy was the undoubted star of the show finishing with 3-2 as Knockbeg dominated in virtually every sector of the field from start to finish.

In the first-half they struggled to turn their superiority in terms of territory and possession into scores due largely to some wayward passes into the full-forward line and only led by 2-4 to 1-2 at the break. After the restart however they were far more accurate with their deliveries into the attacking players and it paid dividends as they added 2-7 to their total.

The pick of the players for Knockbeg along with the prolific Cormac Murphy were Stradbally’s Liam Knowles who dominated at centre-back and Graiguecullen’s Daniel O’Reilly covererd huge swathes of ground in midfield.

Knockbeg made the perfect start to the game with a goal inside the opening minute. A long ball forward broke kindly for Cormac Murphy who made no mistake with his finish to the back of the net. Two minutes later Aaron McGrath added a point as they overwhelmed their Dublin opponents.

Denis Redmond pulled a point back for Portmarnock but that was quickly cancelled out by Ethan O’Neill after 11 minutes as Knockbeg continued to control the game. However their dominance, they didn’t add to their total for the next 15 minutes as they kicked a series of wides while also giving away possession on regular occasions in the final third.

Portmarnock had limited attacking opportunities but they were converting them into scores with Philly Rusk scoring from the penalty spot after 13 minutes when Cian O’Daly was hauled down and he added a point midway through the half to level the scores.

In the final five minutes of the half they eventually put some daylight between themselves and their opponents. A fine move involving Daniel O’Reilly and Ethan O’Neill opened up the defence and Cormac Murphy was left unmarked at the back post to fire home his second goal.

Furhter points from captain Lar O’Sullivan and Murphy left five points between the sides at the break which was a fair reflection of their dominance.

Any hopes Portmarnock may have harboured of mounting a comeback were dashed within minutes of the restart as Cormac Murphy continued his scintillating scoring form adding another 1-1 to his total.

Graiguecullen’s Ethan O’Neill added another point soon after as Knockbeg extended their lead to an unassailable ten points. On a rare foray forward, Denis Redmond added a point for Portmarnock but Knockbeg responded in emphatic fashion with a fourth goal with substitute Darren Lunney finiding the back of the net after being put through by Daniel O’Reilly.

Knockbeg added another five points in the closing stages from Aaron McGrath, Hugh Nolan, Ethan O’Neill (2) and Daniel O’Reilly with Portmarnock managing just one in reply.