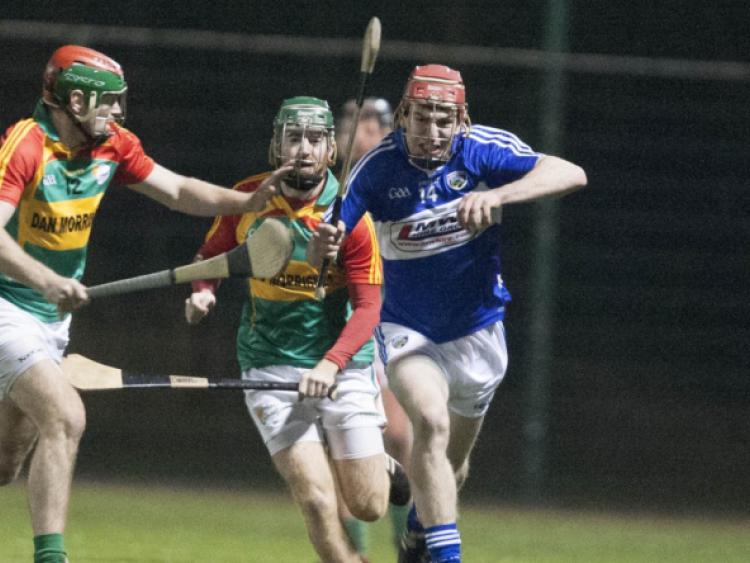 A second half dogged by poor shooting was to be Laois’ undoing, as they lost out to Carlow last Friday night in this Walsh Cup Shield semi-final.

A second half dogged by poor shooting was to be Laois’ undoing, as they lost out to Carlow last Friday night in this Walsh Cup Shield semi-final.

A total of 14 wides in the second half alone told it’s own story, as Laois’ rustiness cost them the chance of another game in the competition.

That matters little in the overall scheme of things, but certainly Laois’ profligacy will have to be addressed before the opening league game against Offaly in four weeks time.

The game was notable too for being the first competitive intercounty game to be played on the all-weather pitch in Heywood. While it is not exactly spectator friendly, the whole setup in the school is hugely impressive, and Laois as a county is very fortunate to have it at our disposal.

On this occasion, however, a Laois win couldn’t be added to further embellish the surroundings. Carlow settled quicker on the unfamiliar surroundings, with David English pointing a long range free with less than a minute gone. John Doyle added another within a minute, and the scene was set for an entertaining first half.

Laois opened their account in the fourth minute with a 65 from Matthew Whelan, but English was on target once again for Carlow soon after as the visitors enjoyed the better of the opening exchanges.

A Zane Keenan free kept Laois in touch, but the impressive Sean Murphy was on target for Carlow moments later. Carlow quickly opened up a decent lead, with John Doyle getting his second and Andrew Gaule finding the target after good work from James Kane.

A long range effort from Sean Murphy meant the Barrowsiders were four to the good, and Laois looked to be struggling. Seamas Plunkett’s men needed a bit of inspiration, and it came from Cha Dwyer. The Ballinakill man won possession 35 yards out, but was on his knees when he got the ball in hand. He must have said a quick prayer in the process, as his miraculous shot, with Carlow defenders surrounding him, flew over the bar for a truly remarkable score.

Two points quickly followed from Zane Keenan, one from play and one from a free, as the pace of the game started to pick up. Sean Murphy and James Kane swung the momentum back in Carlow’s favour with a point each, but Laois then hit four in a row to level the game.

Zane Keenan started the run with a free, before adding two more himself and Neil Foyle hit the other, from 21 yards out, to see the teams tied at 0-9 apiece after 33 minutes.

Carlow had a kick left in them, however, and Andrew Gaule and peerless David English (free), meant that John Meyler’s side were two up at the break.

The second half was a tale of Carlow’s economy and Laois’ wastefulness, as the home side’s wide count streaked into double figures.

The half started promisingly for Laois, as Cha Dwyer was hauled down in the penalty area in the second minute. Zane Keenan assumed the responsibility, but his shot to the top corner was well-saved. From the rebound, Laois managed to win a free on the left wing, which Keenan pointed.

Carlow took control after that, and lead by David English they pointed themselves into a very commanding position, and with three minutes to go they lead by eight points, 0-20 to 0-12.

Laois rallied late on, as Keenan made up for his penalty miss by goaling from a 21 yard free, and Matthew Whelan (free) and Joe Fitzpatrick added some respectability to the scoreboard. The final scoreline flattered Laois, as Carlow claimed a well-deserved victory over their neighbours.