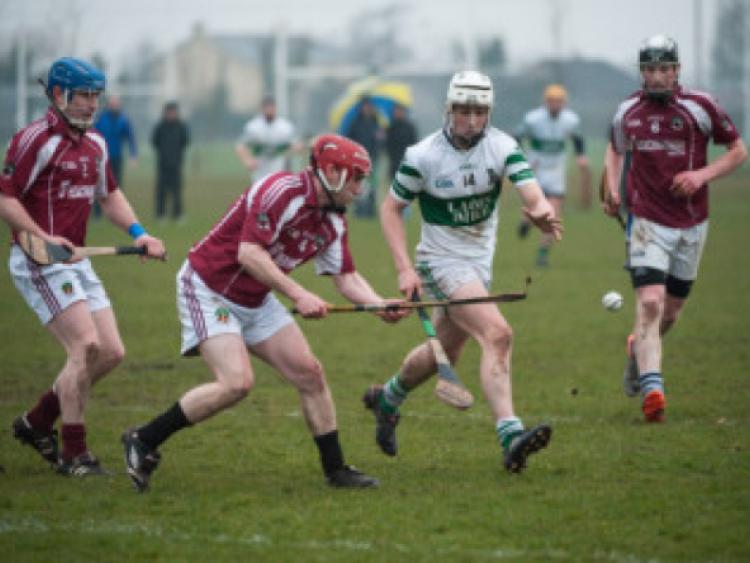 Two goals from Damien Bowe helped Rathdowney-Errill to open their 2014 league campaign with a convincing win over Colt on Saturday.

Two goals from Damien Bowe helped Rathdowney-Errill to open their 2014 league campaign with a convincing win over Colt on Saturday.

Played in awful conditions, Bowe found the back of the net for the first of his goals just before half time, and it was a score which helped to break the Colt resistance.

Rathdowney-Errill have made a bright start to the game with a flurry of points, but Bowe’s goal left them in a commanding position at the break. Chris Murray then found the back of the net for the hosts to give them a brief glimmer of hope, but Bowe struck for his second, and Rathdowney-Errill cruised home from there to record a 3-18 to 1-6 win.

The only sour note for the winners was a hand injury to Pat Mahon, which will hopefully heal quickly.

In the other game played on Saturday, Borris-Kilcotton had just two points to spare over Clough-Ballacolla in a low-scoring affair in Kilcotton.

Again, it was a game plagued by the heavy rain which fell on Saturday evening, and the final scoreline of 0-10 to 0-8 tells its own story.

Borris-Kilcotton lead at half time, and they were indebted to a fine performance from midfielder Danny Fitzpatrick, who scored 0-4.

With Eoin Bergin and Stephen Finan on form at the back, it helped to limit Clough-Ballacolla, and the hosts went on to claim a two-point win.

Round 2 of the league will take place this weekend, and it will give clubs their first chance to field something approaching their strongest teams, as county players will be released. Only three games will be going ahead, with the Portlaoise v Clough-Ballacolla game re-fixed.

The tie of the round will see neighbours Camross and Borris-Kilcotton go head to head. Borris-Kilcotton will be welcoming back their sizeable Laois contingent, and it’s hard to imagine them not being significantly boosted by the return of Matthew Whelan, Brian Stapleton, Patrick Whelan, Jim Fitzpatrick, PJ Scully, Neil Foyle and Joe Campion.

Camross, on the other hand, have just two players to come back to the fold, Dwane Palmer and Ciaran Collier, both of whom have really impressed with Laois this year, but a draw against an understrength Castletown-Slieve Bloom side would suggest that Camross aren’t approaching full tilt yet, so the advantage will be with Borris-Kilcotton.

In the other games, Rathdowney-Errill will also be welcoming back a glut of Laois players, and with the confidence they will all bring, it is sure to lift team spirit. Castletown-Slieve Bloom usually peak later in the year, so the advantage would appear to be with Rathdowney-Errill.

In the last of the games, Colt will come up against Ballinakill, as the men in maroon try to make it two wins from two. Colt suffered a chastening defeat, as can be seen in the lines above, in their first game, and may find things a little tough this weekend too. All games are on Saturday.