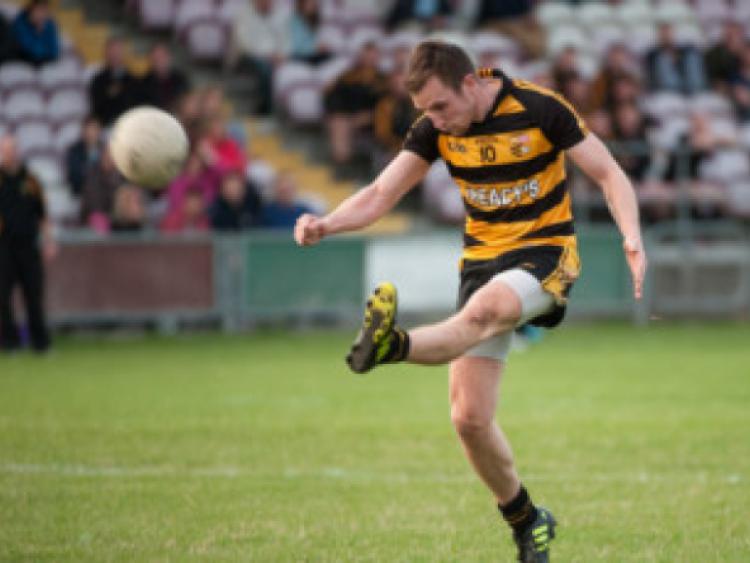 A powerful second half performance from The Heath saw them claim the ACFL Division 2 title in Portarlington last Friday night.

A powerful second half performance from The Heath saw them claim the ACFL Division 2 title in Portarlington last Friday night.

With the teams level two minutes into the second half, The Heath outscored Mountmellick by 1-12 to 0-4 over the rest of the game as they powered on to the final whistle.

Both teams came into the game after morale boosting wins in the opening round of the SFC the week before, but it was The Heath who kicked on with their performance here.

By the time the final whistle had blown, all six starting forwards had scored from play, and they were on top right across the field.

For Mountmellick, it was a disappointing loss, but the injury which forced Colm Coss off the field early in the second half will be of more concern as they prepare to take on Graiguecullen this weekend.

They will have to shake off the loss here as well, and while they lost out on the trophy here, they have achieved their primary goal of promotion to Division 1 which they can be happy with.

They had gotten off to a good start here too, as Niall Mullen pointed a 14 yard free inside of the opening minute. The Heath drew level a little over two minutes later, as a good move involving Evin Keane and Ciaran Booth allowed Cathal Whelan to point from the right wing.

Whelan then repeated the trick from the left wing moments later after a one-two with Chris Bergin. Niall Mullen hit back for Mountmellick, again from a free, but in an evenly contested first half it was The Heath who scored next, with Ciaran Booth rounding off a nice team move with a point from 30 yards out.

Laurence Kenny made his way up from wing back to score from a tight angle for Mountmellick as the game was levelled for the third time in 14 minutes. Neither side could really take control of the proceedings, as they exchanged pooints once again with Niall Mullen (free) and Evin Keane on target.

Chris Bergin then edged The Heath ahead with a free only for Mullen to again respond for Mountmellick to see the teams level at 0-5 each coming up to half time. The Heath would take a narrow lead to the break, however, with Chris Bergin pointing from the right wing.

That left them 0-6 to 0-5 ahead at half time, but their lead was quickly wiped out in the second half when Niall Mullen slotted over a free.

That appeared to set the game up for an evenly contested second half, but The Heath gradually pulled away after that.

Cathal Whelan edged them in front with a good point from out on the left wing, with Brian Ging adding another from a tight angle a minute later. Whelan then added another free before Mountmellick were forced to withdraw Colm Coss with an ankle injury.

The Heath pushed on in his absence, as John Paul Nerney got his name on the scoresheet and Brian Ging hit is second as they opened up a six point gap at 0-12 to 0-6.

Mountmellick briefly upset their momentum, with Mullen once again pointing a free for them, but The Heath hit back with a brace of points from Aidan Bergin and Cathal Whelan.

Mountmellick again tried to play their way back into the game as Ethan Lalor and Mullen (free) got them within five, but that was as good as it got for them.

The Heath rattled off three points in as many minutes before scoring a fortuitous goal. Cathal Whelan’s shot from the right wing deceived Adam O’Reilly, and it snook into the top corner to seal The Heath’s victory, as Chris Bergin’s late point rounded off an impressive victory.