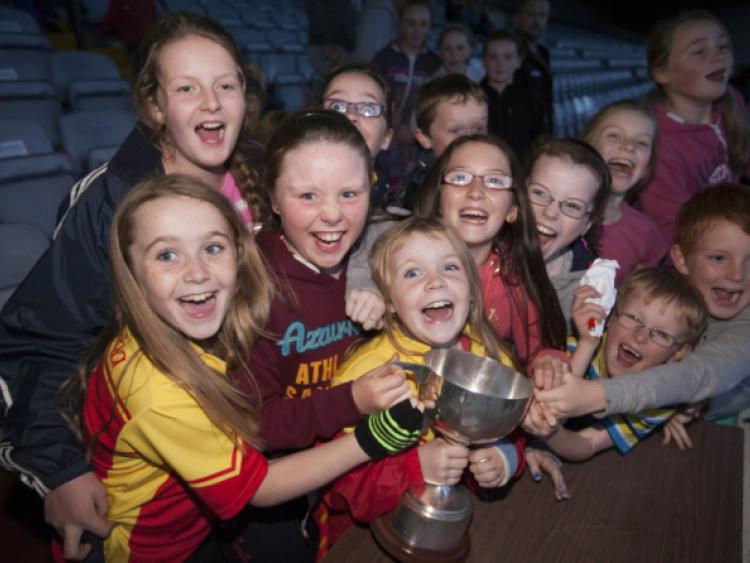 The Harps season ended on a high with a championship final win over Rathdowney-Errill on Wednesday evening last in O’Moore Park.

The Harps season ended on a high with a championship final win over Rathdowney-Errill on Wednesday evening last in O’Moore Park.

It was Rathdowney who opened up the scoring, James Fitzpatrick slotting over the bar, with Niall Browne adding another moments after Chris Browne and Danny Campion hit the post with goal efforts.

It took eight minutes for The Harps to score their first point, Albert Townsend striking the ball well over his right shoulder. The Harps stepped it up a gear after this when two minutes later, captain Freddie Townsend made a fine individual run, tearing the Rathdowney-Errill defence apart, and put his shot into the back of the net. Another point from Albert Townsend and three well taken frees from the on form Tyrell put The Harps ahead 1-5 to 0-2 after sixteen minutes.

This was to be their last score for twelve minutes as Rathdowney-Errill ignited a revival and James Fitzpatrick converted four frees on the trot to close the gap.

The Harps Denis Lennon scored for his side after Colm Dunphy laid on the sliotar to him, and James Fitzpatrick added another free leaving the score 1-6 to 0-7 in favour of The Harps at half time.

The Harps Denis Lennon scored the first point of the half, hitting his shot from a tight angle following good play from Shane Tyrell.

Danny Campion and Jordan Kavanagh hit back for Rathdowney-Errill, and their improved form was rewarded when Anthony Costigan fired to the net.

The Harps responded to this with a pivotal point from Colm Dunphy to keep his side in contention. Rathdowney-Errill continued to stand firm, James Fitzpatrick and Chris Browne scoring a free each. When Danny Campion scored a cracking long range point to cheers from the stand in the forty-eighth minute it looked like it was to be Rathdowney-Errill’s day. Credit to The Harps they replied to the Rathdowney-Errill revival with Colm Dunphy on hand to hit the ball low and hard into the right hand corner, leaving the score all square at 2-9 to 1-12 with ten minutes remaining.

With the game there to be won, Shane Tyrell scored three frees for The Harps to seal the win, making Chris Browne’s late free a mere consolation at the end of a gripping game of hurling.