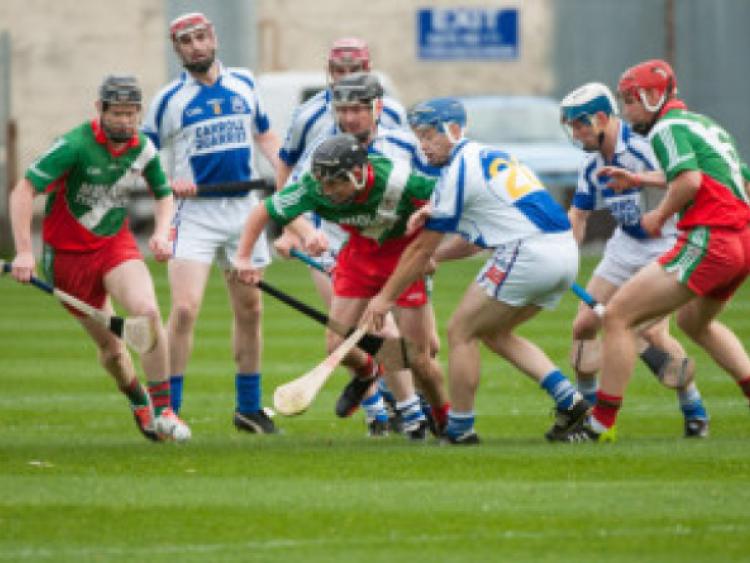 Castletown-Slieve Bloom pulled off a shock on Friday evening, decisively beating last years’ finalists Borris-Kilcotton by five points, who will undoubtedly look back ruefully at some of the fifteen wides they hit; nine in the first half alone.

Castletown-Slieve Bloom pulled off a shock on Friday evening, decisively beating last years’ finalists Borris-Kilcotton by five points, who will undoubtedly look back ruefully at some of the fifteen wides they hit; nine in the first half alone.

The intensity of the opening few minutes was very much with Castletown-Slieve Bloom who got off to a flying start, three points from the on form Brendan Reddin and a point from main man Ben Conroy put them 0-4 ahead.

Borris-Kilcotton’s PJ Scully got his sides first point with seven minutes on the clock, when he went for goal from a close in free and it rebounded off the Castletown-Slieve Bloom goalkeeper, and Scully slotted over the bar. John Wall added to their tally with a point following good play in the forward line.

Brian Stapleton, Owen Bergin and captain Noel Delaney defended well for Borris-Kilcotton but the pace of the Castletown-Slieve Bloom forwards proved difficult to curtail. Brendan Reddin and Ben Conroy were the only scorers for Castletown-Slieve Bloom in the opening half, totting up twelve points between them but Ryan Mullvaney and Martin Phelan looked constant threats up front and were on hand to set up Reddin and Conroy.

Borris-Kilcotton continuously misjudged the ball they were sending into the full forward line; often sending it too long which contributed to their comprehensive wide total. PJ Scully kept them within grasp of their opposition scoring four points in the remainder of the half and Scully, along with Joseph Campion, set Kevin Finlay up for a superb point, punishing a poor puck out by the Castletown-Slieve Bloom ‘keeper.

Borris-in-Ossory-Kilcotton started the second half with a glimpse of the form that earned them a spot in the final last year. The backs defended tighter and their delivery of ball of the forwards was much more accurate than in the opening half. Points from John Wall, PJ Scully and a great individual score from Neil Foyle, catching the ball from the puck out and scoring under pressure saw their side claw their way back into the game.

This was as close as Borris-in-Ossory-Kilcotton got to Castletown-Slieve Bloom as they responded emphatically to this revival with Finion Cuddy sending a long ball into Ben Conroy in the full forward line, whose hand flicked it into the back of the net. PJ Scully converted two frees from a tight angle to keep the pressure on but when Brendan Reddin set Martin Phelan up for his well taken goal, which swung the game in Castletown-Slieve Bloom’s favour, made it evident that it wasn’t to be Borris-in-Ossory-Kilcotton’s day as they trailed 2-16 to 0-16 with nine minutes remaining.