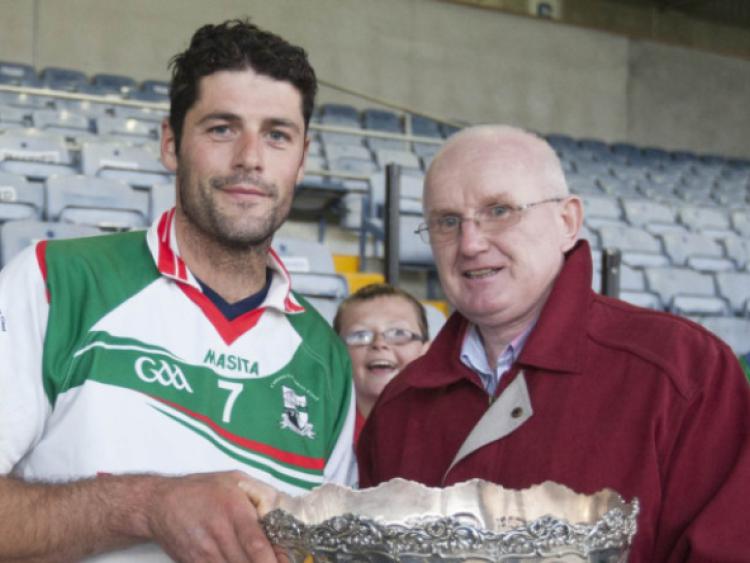 Rathdowney-Errill beat Clough-Ballacolla by three points on Friday night to secure a place in the semi-finals of the Laois SHC, as well as claiming the ACHL Division 1 title.

Rathdowney-Errill beat Clough-Ballacolla by three points on Friday night to secure a place in the semi-finals of the Laois SHC, as well as claiming the ACHL Division 1 title.

SHC Round 2 and ACHL Division 1 Final

With the teams drawn to pla each other in both competitions they decided to have this game double up as both, and it was Rathdowney-Errill who got their hands on the silverware.

They did so in somewhat controversial circumstances as well, as Mark Kavanagh appeared to be in the square when he flicked home Rathdowney-Errill’s goal in the second half.

Clough-Ballacolla disputed the score, but it was to no avail as the goal stood, and it will have been particularly disappointing for them to have lost out by three points in the end. In truth, however, Rathdowney-Errill probably shaded the contest overall, in what was a funny game.

Despite it being close all the way through (the biggest lead was four points), there was a disappointing lack of intensity to the game. Neither side seemed to be playing at 100% and with their focus on greater prizes later in the year, perhaps neither are yet ready to play to 100% either.

Rathdowney-Errill got off to a bright start when teenager Mark Kavanagh pointed from out on the right wing, and Ross King did likewise from the other side of the field two minutes later.

Clough-Ballacolla opened their account in the sixth minute thanks to a Picky Maher free, but Enda Meagher quickly restored Rathdowney’s two point lead.

Picky Maher again landed a free, but Ross King hit back with a brace of frees to open up what would be the biggest lead of the game at 0-7 to 0-3.

Mick McEvoy and Maher (free) halved the deficit to keep those in attendance guessing on how the game was going to pan out, and a couple of points for each side had two still in it five minutes out from half time.

Clough-Ballacolla took control of the game for those final five minutes, starting with an unorthodox point from Stephen Maher. He was put through on goal but with no hurl in his hand, he was forced to kick the sliotar, and it flew over the bar.

A minute later, Willie Hyland stepped up to a 21 yard free and powered past the bank of Rathdowney-Errill defenders, with a Picky Maher free rounding off the scoring for the half.

That left Clough-Ballacolla 1-9 to 0-9 in front at half time, but Rathdowney-Errill came out strongly at the start of the second half. Joe Fitzpatrick pointed inside 20 seconds of the restart, and Ross King added a ‘65 a little over a minute later.

Lar Mahon was then caught in possession and coughed up a free for Picky Maher to lift the siege, but Tadgh Dowling and Ross King (free) had Rathdowney-Errill back on level terms in the 35th minute.

It was up to Picky Maher to point for Ballacolla once more, and John A Delaney added another to put them two ahead.

The Rathdowney-Errill goal arrived next, as Brian Campion launched a long-range free into the penalty area, and Mark Kavanagh did superbly to get a flick on it and steer it past Danny Hanlon.

Ross King split the posts with a free moments later, and Rathdowney-Errill were now in the driving seat, and they wouldn’t allow Clough-Ballacolla back into the game.

The rest of the game was close, but Enda Meagher’s wonderful long range point from the left wing put the seal on a three point win.