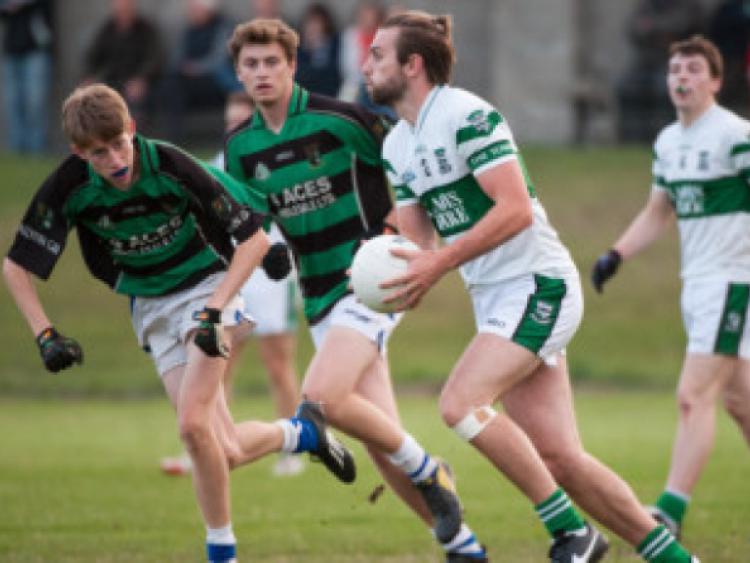 In a low-scoring game last Thursday night, it was Portlaoise who emerged worthy victors in Mountmellick, securing themselves two valuable points and second place in IFC Group B.

In a low-scoring game last Thursday night, it was Portlaoise who emerged worthy victors in Mountmellick, securing themselves two valuable points and second place in IFC Group B.

Portlaoise’s Gareth Dillon opened the scoring with a free, and sparked a period of dominance from them, as they worked the short kick-out well to take a 0-5 to no score lead inside 16 minutes.

Ballyfin’s tactic of a high ball into their small forwards failed to bear fruit and made it too easy for the Portlaoise backs to defend. Ballyfin had a goal chance denied by Portlaoise’s Brody in the fifteenth minute and they waited a further five minutes to register their first score; Ricky Quillnan fouled in the full forward line and James Moore sent the free over the bar. Moore scored another free five minutes later with the Ballyfin midfielders running at the Portlaoise defence and getting fouled. Two minutes after a good move involving Ballyfin’s George Lanham, James Moore and Darragh Connolly set Louis Duff up nicely to kick a sensational score to close the gap. A point from either free taker on the cusp of half time left Portlaoise with a two point cushion 0-6 to 0-4.

Portlaoise started the second half strongly, a point from Ricky Maher settling them, followed by a scored free by Gareth Dillon. Dillon then had the chance to stretch the lead from the penalty spot, but he couldn’t find hit the net.

Portlaoise added another two points through a converted free from Ricky Maher and a superb score from Liam McGovern in a move which came from a side line ball kicked by Brian McCormack and involved Ricky Maher and Gareth Dillon before McGovern kicked it between the posts.

Ballyfin didn’t get their first second half score until the 47th minute when the on-form Darragh Connolly linked up with Ricky Quillnan, who was fouled, and James Finn sent the resulting free over the bar. This move sparked a Ballyfin revival, James Finn scoring a wondrous point after solid defending in the Ballyfin back line. Portlaoise’s Dean Cullen set Ricky Maher up for a point in what was to be Portlaoise’s last score of the game in the 52nd minute. Down the other end James Finn converted two more frees, and this left the score at 0-11 to 0-8 with a minute left on the clock.

A late penalty appeared to answer Ballyfin’s prayers, but James Finn’s effort was saved by Brody, and though Finn pointed the resulting 45 it was too little too late for Ballyfin.