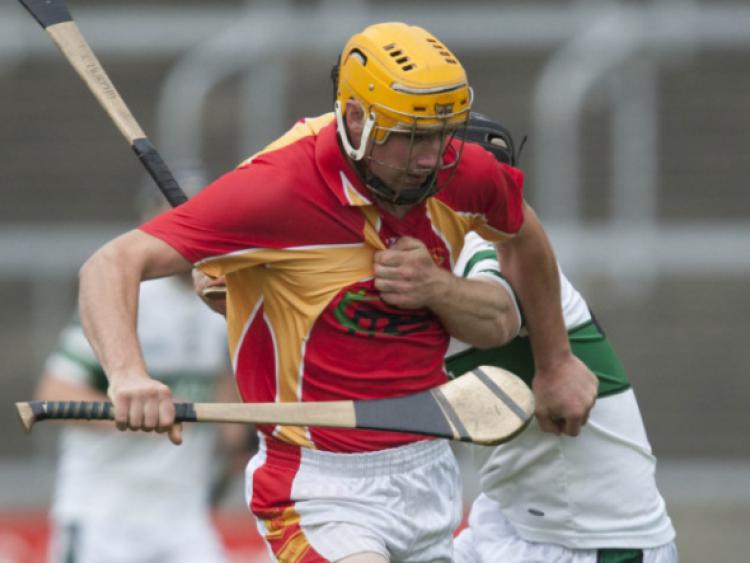 The Harps qualified for the quarter-finals of the Laois SHC on Saturday evening, as they eased past Portlaoise to claim a seven point win.

The Harps qualified for the quarter-finals of the Laois SHC on Saturday evening, as they eased past Portlaoise to claim a seven point win.

The victory here for The Harps consigns Portlaoise to a relegation playoff against Borris-Kilcotton, and they could have few complaints as they were second best throughout this game.

Once John Brophy fired in The Harps’ first goal in the 24th minute, the Durrow based side were in control of the game, and Portlaoise never really threatened them.

With Joe Phelan red-carded in the second half too, it robs them of one of their most experienced players for the playoff with Borris-Kilcotton. For The Harps, however, they can be pleased with their performance here. They worked scores when they needed them and had a good spread of scorers, but will have to improve if they want to make the last four of the championship.

For the most part, the first half was disappointing fare, as neither side really imposed themselves on proceedings in the opening 20 minutes.

It was understandable, given the nature of these games, as The Harps took a tentative early lead thanks to a wonderful point from the right wing by Eoin Clancy. The Portlaoise response was swift, as Sean Culleton intercepted a pass in The Harps defence and drew a foul, allowing Cian Taylor to point the free.

Taylor then edged Portlaoise ahead two minutes later, driving onto the ball 45 yards out and arrowing a shot straight between the posts. A full six minutes would elapse without a score in response from The Harps, although chances were at a premium for both sides.

John Brophy eventually restored parity from a free, and Ronan Delahunty landed a booming long-range effort to put The Harps in front. unsurprisingly, it didn’t last long, as Taylor was on hand for Portlaoise to draw them level with another free.

It was only in the last ten minutes or so of the half that either side took control of proceedings, and it was The Harps who moved clear. As is so often the case, it was a goal which swung the game in their favour, with John Brophy supplying the finish.

It came about courtesy of a sideline cut from Shane Donohue out on the right wing, as the ball flew all the way into the penalty area, where Brophy caught it and tapped it past Craig Haslem. Brophy then pointed a free from distance before adding another point from play as he came to the fore in proceedings, with Portlaoise struggling to make an impact at the other end.

As the half ticked into the injury time, Brophy pointed another free, with Cian Taylor managing one in reply for Portlaoise, as The Harps headed to the dressing room 1-6 to 0-4 ahead.

Things didn’t look a whole lot better for Portlaoise on the restart, as The Harps had two shots on goal within the opening 40 seconds, with Sean Bourke pointing the second one. Tony Byrne responded with a booming effort from way out on the right wing, but Portlaoise’ day took a significant turn for the worst after that.

Joe Phelan was shown a straight red card for an off the ball incident, and it was always going to be a long way back after that. Sean Bourke pointed moments later to drive home The Harps’ advantage, and Portlaoise’s hopes of getting back into the game were then twice thwarted by excellent saves from Kevin Galvin.

Cian Taylor and Shane Donohue exchanged points midway through the half before the clinching score came for The Harps. Good pressure from their forwards in the Portlaoise penalty area saw them turnover possession, and Sean Bourke gathered it up before firing to the net.

The lead was now out to nine, and with just 14 men, Portlaoise were never going to eat into that deficit in the time remaining. Cian Taylor kept them ticking over with frees, but Portlaoise just hadn’t enough of a threat from open play, and The Harps ran out deserving seven point winners in the end.