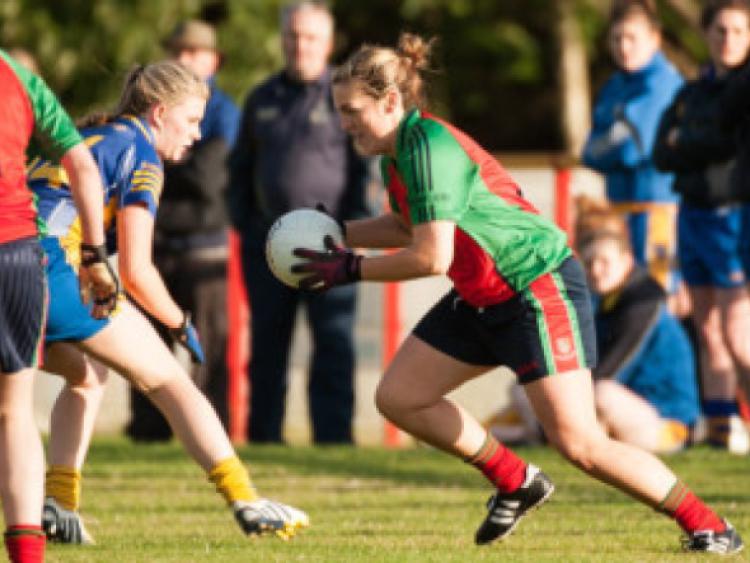 Timahoe were narrow winners in a truly thrilling spectacle in Emo on Monday evening last. Both teams were missing key players due to injury but spectators were treated to a scoring exhibition by both sides in a very close fought affair.

Timahoe were narrow winners in a truly thrilling spectacle in Emo on Monday evening last. Both teams were missing key players due to injury but spectators were treated to a scoring exhibition by both sides in a very close fought affair.

Sarsfields went into the game as favourites having beaten Timahoe in the county final last year and, more recently, in the league during the group stage.

Timahoe won the throw up and immediately went on the attack, centre forward Shona Barry dancing menacingly through the Sarsfields defence. The combination of Laura Peake, Emma and Alison McEvoy overturned the Timahoe threat and the ball fell into the hands of Tracey Lawlor who was tackled and converted the free herself for the games opening score.

Timahoe opened up their scoring with Sarah Quigley linking up with Barry who sent the ball over the bar. Grainne Dunne made a run up the field a minute later and, alongside Gemma O’Connor set Eimear McWey up for a well taken point to put Timahoe ahead. This pattern of cat and mouse continued between the sides until, in the fifteenth minute, Meaghan Dunne and Tracey Lawlor combined to allow Ciara Burke in on goal which she slotted in to the bottom right corner.

Timahoe continued to add to their tally and created some wonderful plays. Timahoe were rewarded for their efforts in the 21st minute when Aine O’Sullivan made a wondrous catch in midfield, passed it to Sarah Quigley who made a diagonal run in on goals and struck the ball strongly into the back of the net. Typically, such was the pattern of the game, Sarsfields responded to this effort four minutes later when Rosemarie Bermingham and Lorna O’ Sullivan linked up with Laura-Marie Maher who finished the ball perfectly past Bernie Deegan. Two frees from Martina Dunne on the cusp of half time left her side ahead by a goal at half time, 1-11 to 2-5.

Tracey Lawlor scored the first point from a free in the second half to narrow the gap. Eimear McWey and Martina Dunne scored a point each for Timahoe following good play from Clodagh Dunne and Maureen Young in the half back line.

These were to be Timahoe’s last scores for fifteen minutes as Sarsfield worked scores from Rachel Williams, Tracey Lawlor and Olywn Farrell to put them ahead 2-12 to 1-13 with eight minutes left on the clock. Martina Dunne proved to be the hero for Timahoe, kicking one point from play and three from frees in the remainder of the game. Painstakingly for Sarsfields her last free, and the winning point, came from an error in their midfield where they lost possession. With nerves of steel, Dunne kicked the winning point securing the league title. Both teams are out again on August 24th in the senior championship; Timahoe meeting St Brigids while Sarsfields face St Conleth’s.