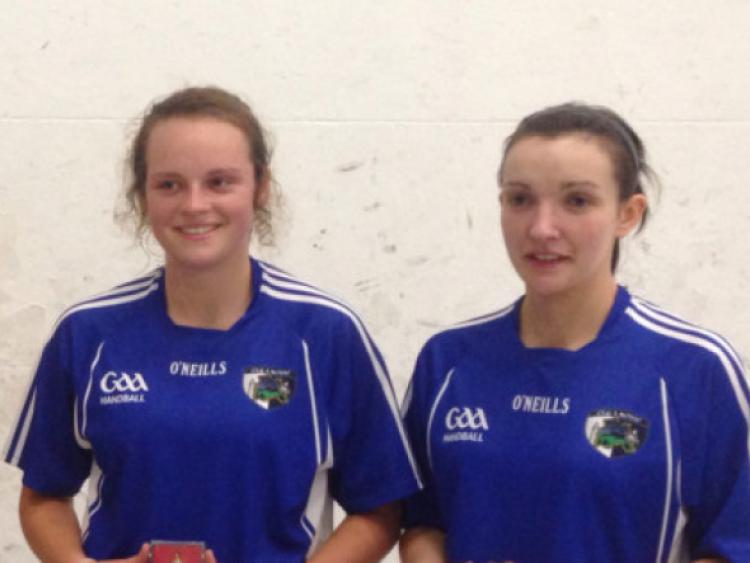 The Laois pairing went into the final as strong favourites but knew that in Maher and Love they faced two very competent handballers capable of playing to a very high level.

The first game was to prove a one-sided affair with the occasion seeming to get to the Kilkenny girls. The power of Niamh Dunne’s shots and Ciara Dowling’s ability to place the ball around the court was putting Kilkenny under all sorts of pressure and they were powerless to stop the Laois girls winning the first game on a commanding 21-2 scoreline.

Having lost the first game so tamely, the Kilkenny girls knew they had to come out fighting in the second game and raise the intensity of their play. They were to make a perfect start to the second game with Denise Love serving the ball impressively. Niamh Dunne was struggling to return the Kilkenny serve and the Laois girls soon found themselves trailing 10-1. Credit must be given to Dowling and Dunne who maintained their composure and did not allow panic to set in despite the sizeable Kilkenny lead. Gradually they reduced the arrears and were to level the game at 15 aces apiece.

Dowling and Dunne were now in the ascendancy and they put themselves in a match winning position by claiming the next five aces. Needing one more ace to take the Leinster title it appeared to those in attendance that Laois were on their way to victory but Maher and Love were to show great heart and responded superbly by taking the next four aces.

With the game now hanging in the balance it was Dowling and Dunne who were to finish the stronger. The Laois girls were to regain the initiative with a great kill-shot from Niamh Dunne and from here they made no mistake serving out the game for a 21-2 21-19 victory.

This Leinster success was particularly sweet for the Laois girls having narrowly lost out to Dublin in last year’s final. They will now go into the All-Ireland series optimistic that they can add an All-Ireland title to their Leinster crown.