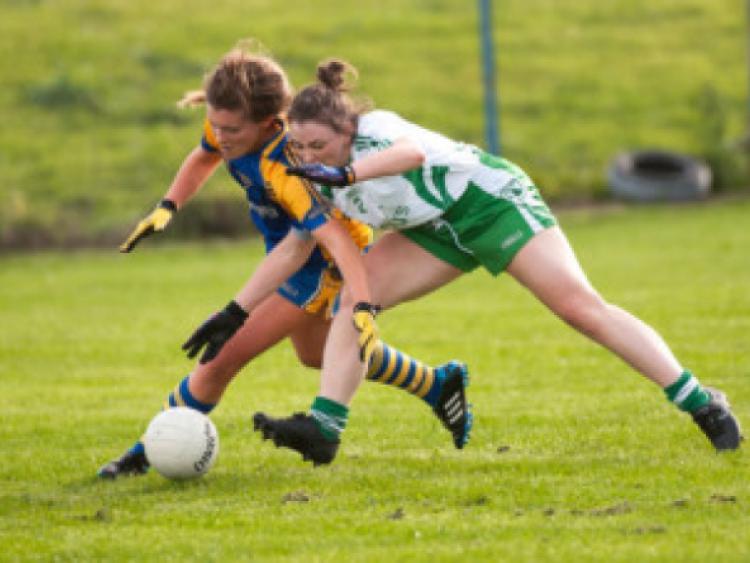 Laois champions Sarsfields and the Dublin representatives Na Fianna will meet in the Leinster Ladies Football Club Final in Clane this Sunday at 2pm.

Laois champions Sarsfields and the Dublin representatives Na Fianna will meet in the Leinster Ladies Football Club Final in Clane this Sunday at 2pm.

It will be the second meeting of the clubs in the final, the other taking place in 2011 when Na Fianna came out on top by 3-3 to 0-10. That defeat was Sarsfields only loss in four Leinster campaigns.

The Laois champions are the reigning provincial titleholders and have developed and matured into a capable and confident outfit over the last three years. The 2011 result will have little bearing on Sunday’s game as the teams have changed, in Na Fianna’s case considerably, since the meeting three years ago.

Sarsfields will approach Sunday’s game with a very positive attitude and this belief in their own abilities has been the hallmark of Manager Alan George’s approach since taking over in early 2011. During his reign, the results tell their own story, three Laois titles and one Leinster.

Sarsfields went within a whisker of a first All-Ireland Final appearance in 2013 but lost by a single point, 4-8 to 3-10, to eventual winners Carnacon of Mayo in Ballintubber. But this week all minds will focus on getting out of Leinster and, based on results to date, they seem to be building up nicely as the season progresses.

They had little difficulty in the league stages in Laois and recorded a big win over old rivals Timahoe in the final, romping home by 4-15 to 0-9. They followed this up with a 5-20 to 1-4 defeat of Longford’s Killoe in the Leinster semi-final.

Sarsfields will show very few changes in personnel from the team that won last year’s Leinster Final. Grace Weston, Louise Bergin and Siobhan Fitzpatrick are off the scene, having taken time-out temporarily, but Ciara O’Loughlin, Rosemarie Bermingham, Laura Peake and others have grabbed their opportunity to impress.

In general however the team is a very settled unit back- boned by the McEvoys, Emma, Mags, Jenny and Alison, Tracey Lawlor, Olwyn Farrell, Amy Grehan, Clare Conlon plus relative newcomers Joyce Dunne, Rachel Williams, Laura-Marie Maher, Ciara Burke and Meaghan Dunne. Another big plus for Sarsfields is the inclusion of county minors such as Lorna O’Sullivan, Amy Loughman, Mary Keating on a very strong bench.

The scene is set for another showdown against the Dublin champions who, as always, enter the fray with impressive credentials. Close calls against Foxrock-Cabinteeley and St Brigids in the Dublin championship were followed by easy victories over Shelmaliers from Wexford and Seneschelstown from Meath in the lead up to the Leinster Final. Na Fianna have lost some very big names since 2011 including Dublin player Mary Nevin and Laura Walsh (Westmeath) and Donegal’s Nora Stapleton, the latter two to the Irish Rugby panel.

However they can still call on experienced goalkeeper Sorcha Turnbull, Leah Caffrey who was corner back for Dublin in this year’s All-Ireland Final, the O’Donnell sisters, Bronagh and Alma, who played with Armagh in the 2007 All-Ireland final defeat by Cork. Ciara McDermott played for Mayo for a number of years and Donegal natives Lorraine O’ Sullivan and Nadine Doherty are the longest serving panel members.

The Dublin champions’ top scorer Orlagh Egan, who played for Dublin for a number of years, notched 2-10 of their 2-17 total against Seneschelstown in the Leinster semi-final.

The team that comes out of Dublin is traditionally installed as favourites but over the last six years Timahoe and Sarsfields have won four Leinsters between them.

It will not be an easy game for Sarsfields but a side averaging a shade under 5-19 per game cannot be dismissed and it will take a good team to knock them out of this year’s competition.

Sarsfields Path to the Final