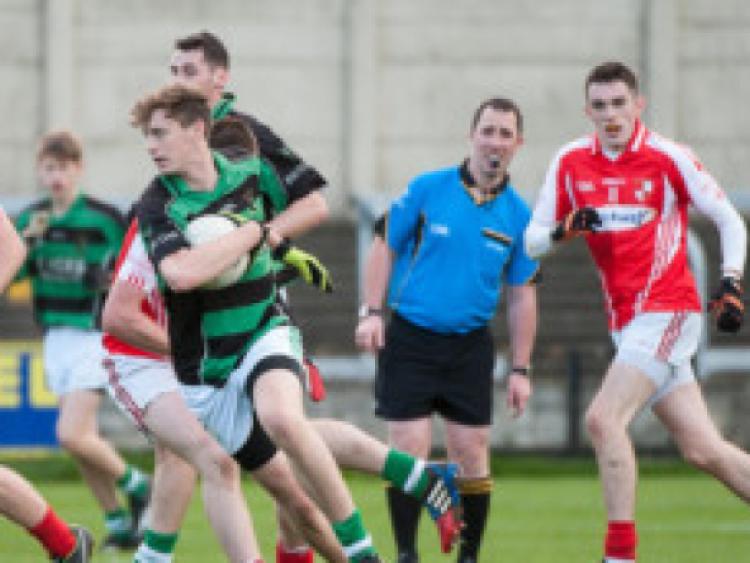 What a difference a week makes. Six days before this game, Ballyfin historically claimed a spot in the Laois senior football ranks after overcoming favourites Timahoe to win the Laois Intermediate championship.

What a difference a week makes. Six days before this game, Ballyfin historically claimed a spot in the Laois senior football ranks after overcoming favourites Timahoe to win the Laois Intermediate championship.

On Saturday afternoon they made a swift exit from the Leinster club championships after a strong second half performance by Meath’s Ballinlough saw them lose a game they were very much in control of for most of the match.

Ballyfin got off to a good start, George Lanham and James Finn won the throw up and Finn sent a direct ball into Ricky Quillinan who slotted it over the bar with his deadly right boot with just twenty seconds on the clock. Ballyfin had to wait another ten minutes for their next score; a free from James Moore after good play from Jason Horan.

Ballinlough opened their scoring after seventeen minutes, centre back Colm Mallen sending a free over the bar. The Laois IFC final player of the match Seán Moore opened up his scoring in the 18th minute; Jason Horan made a great interception on a Ballinlough attack and laid the ball off to Seán Moore who was running off his shoulder. Ricky Quillinan caught a ball on the full forward line and was fouled in the 24th minute; James Moore sent the resulting free between the posts giving Ballyfin a 0-4 to 0-1 lead.

Former Meath county player, Peadar Byrne sent a free over for his side before half time, putting his side within two of the Laois champions; 0-4 to 0-2. The referee made the first half an unenjoyable affair; numerous players on each side received yellow cards for tackles that barely warranted a free. This infuriated both teams and supporters and took from the atmosphere of the game.

Ballyfin started the second half strongly; Lanham and Finn won the throw up and Seán Moore sent the ball between the posts within twenty-one seconds of the restart. The referee continued with his inconsistency but this time his decisions went in Ballyfin’s favour; James Moore kicked the ball over the bar from a free to the sound of booing from the Meath supporters.

This was to be Ballyfin’s last score for twelve minutes as the effects of having only six days recovery between the county final and the club championship began to take its toll on Ballyfin. Ballinlough’s Peadar Byrne tapped another free over the posts; Byrne made a good catch in midfield and laid it off to Colm Mallen who sent the ball between the posts.

Mark McCullen saw his long range effort bounce over the bar, the wind slightly favouring Ballinlough. A long range point from Colm Mallen brought the sides level at 0-6 apiece and centre forward Sean Geraghty put his side ahead a minute later with a lovely right footed kick from 30 yards. Ballyfin’s Ricky Quillinan was on hand yet again to win a free which James Moore sent over the bar to bring the sides level 0-7 each with 15 minutes to play.

Mark McCullen scored a point to give Ballinlough an edge again. Ricky Quillinan brought the sides level with a wonderful score with his right foot with just seven minutes remaining. In the end, it was Ballinlough’s subsitutes who got them over the line, Mallen added another point and the two substitutes; scored a point each to set them up with a date against the Offaly champions Raheen next weekend.

For Ballyfin, it was always a big ask of them to be able to recover from their historic win after six short days. They played solid football throughout the game but Ballinlough, who have had a three week break since their county final victory, demonstrated in the second half how important a longer break is.