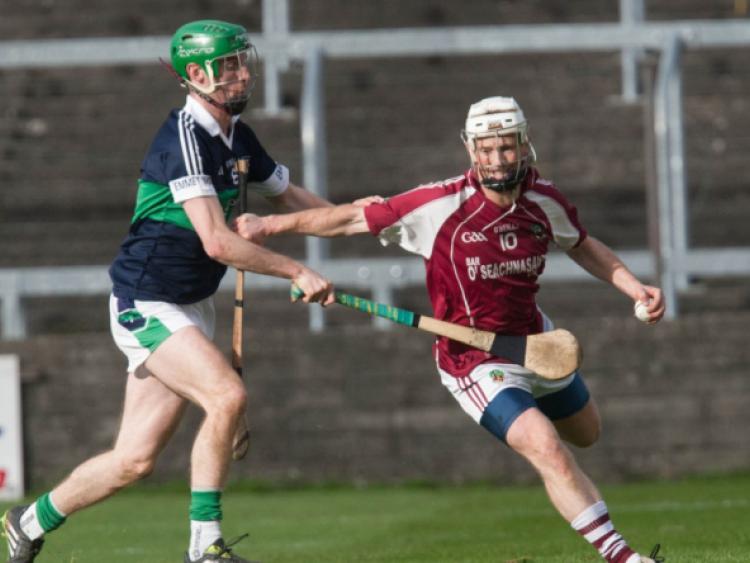 Ballinakill survived a sending off and a late comeback from Bray Emmetts to book their place in the semi-finals of the Leinster Club IHC.

Ballinakill survived a sending off and a late comeback from Bray Emmetts to book their place in the semi-finals of the Leinster Club IHC.

In a game that packed as much entertainment and drama as you could hope to see in an hour, Ballinakill were good value for the win, but they were made to really battle for it.

Bray looked in major trouble in the first half when Ballinakill, leading by seven points and with wind advantage, lost Seamus Dwyer to a straight red card. They managed to maintain that seven point lead to half time, but Bray steadily chipped away at it in the second half.

Christy Moorehouse lead the charge for them, scoring 0-7 in the second half alone, including a run of four points in three minutes which really put the squeeze on Ballinakill.

When the game was hanging in the balance, however, Cha Dwyer was on hand to keep Ballinakill on the path to victory. He scored all of Ballinakill’s points in the second half, five in total, and kept coming up with scores when his team really needed them.

Bray had gotten off to a bright start, with Mikey Lee pointing within seconds of the throw in. Ballinakill had a strong wind advantage in the first half, but they were finding it difficult to settle into the game, as they only got two points in the opening seven minutes; Eddie Dwyer and Damien Carter providing the scores.

Eamon Jackman and Mikey Lee swapped points from frees before Ballinakill started to take control of the game, starting with an excellent point from Cha Dwyer from out on the right wing.

Seamus Dwyer added another from distance, with Jackman tapping over his second free. Things were going their way, and that was further highlighted when Cha Dwyer scored a monster free from his own 45 yard line.

A storming run out of defence by Eoin Delaney set up another point for Eamon Jackman, and MJ Dunphy stretched the lead to seven after speeding past Jim Doyle to point from 35 yards.

Christy Moorehouse broke the run of Ballinakill scores with a point for Bray, but Jackman was on target with two frees to quick succession as Ballinakill continued to press forward. Bray finally found some form in front of goal in the closing stages of the half, as Moorehouse, Lee and Marc Lennon pointed, before Seamus Dwyer was shown a red card for an off-the-ball incident. MJ Dunphy still ensured Ballinakill had the final say in the half, however, as his point sent them to the dressing rooms leading 0-13 to 0-6.

Now a man down, and playing into strong breeze, a tough 30 minutes lay ahead for Ballinakill, and it certainly played out like that. Bray had an early goal chance from Christy Moorehouse, which was superbly saved by Paul Simms, but the Bray man opened the scoring for the half soon after from a free.

He added another free soon after, but Ballinakill finally opened their account for the half midway through, as Cha Dwyer won two frees and pointed them both.

Aaron Murphy then saw a goal chance superbly saved by Paul Simms, who deflected it over the bar. Cha Dwyer replied with a free, before Bray Emmetts hit four points in a row in three minutes to get back within three points and set up an exciting finish.

Cha Dwyer scored another free, but Mikey Lee and Christy Moorehouse pared the lead down to two as the game ticked into injury time. There was time for one more score, and it went to Ballinakill as brilliant passing move ended with a clinching point.