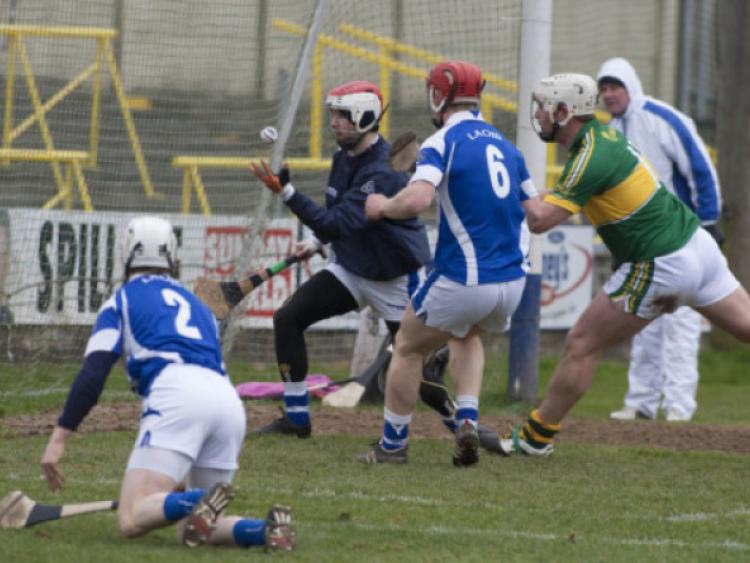 Seamas Plunkett admitted he has seen slow but steady progress from his side after watching them secure a secon successive league win on Sunday.

Seamas Plunkett admitted he has seen slow but steady progress from his side after watching them secure a secon successive league win on Sunday.

Laois had eight points to spare over Kerry as they pulled well clear of the Munster side in the second half. While Laois continue to play catch-up on their rivals, Plunkett is still pleased with the performances of his team to date. “This is very, very early, but we are trying to change things, just to hold onto possession rather than giving it away cheaply.

“You fight so hard for it, you simply cannot give it away cheaply, and we are trying to change things. We want a little bit more composure on the ball and deliver a better final ball and we have a lot of work to do on that, but you can see it in some instances where it’s coming together, and when it does, we get some fantastic scores.

“There was one score against Kildare, that when we looked back on it, we worked out of the full-back line up the field to the half-forward line and then belted it over the bar, that’s what we’re trying to work on and in doing that, we’re trying to play to our strengths. I’ve always said we’ve got really good skillful players, and we’re just trying to hold onto the ball, be composed, work the score, take it, and then get back to defensive duties again.”

While his team impresses him, he’s not naive enough to think Laois are without problems, and he hopes to see an improve work rate from the forwards over the coming months. “I thought we had some good moves today and got some good scores, but we conceded a bit as well, and that’s not just the backs fault.

“Offensively we got some good scores from the forwards, but defensively, I would like to see us blocking up a bit more ball coming out of there, so definitely that’s something we need look at and work on over the next few weeks.”

The win here also put Laois clear at the top of the table, which is exactly where Plunkett wants his team to be as they chase promotion. “That’s an absolute priority for us (promotion), to get out of this Division, and that’s meant as no disrespect to any of the opposition.

“This is our goal, we want to get into Division 1B and get quicker hurling and probably more team-oriented hurling, but having said that they will be difficult games, and we’ll have to take them one at a time.

“We’re up against Westmeath next in Mullingar and we’ll prepare properly for that, there might be a chance later on in the summer that we could be playing Westmeath in the championship. so we’re concsious of all those things. Our key priority is to win the next match, then move on to the next one, try to get into the Division 2 final, try and win that, and certainly that would satisfy one of our goals for the year if we were able to do that.”

Having made a number of changes of this game also, the Laois manager was happy that competition for places is increasing. “We haven’t gotten into any flow of hurling yet, we’re still doing a lot of skills work at the moment, but when we do get into that situation, we want all positions to be competitively fought for and if other players look at this that’s what they’ll see, huge competition for places.”