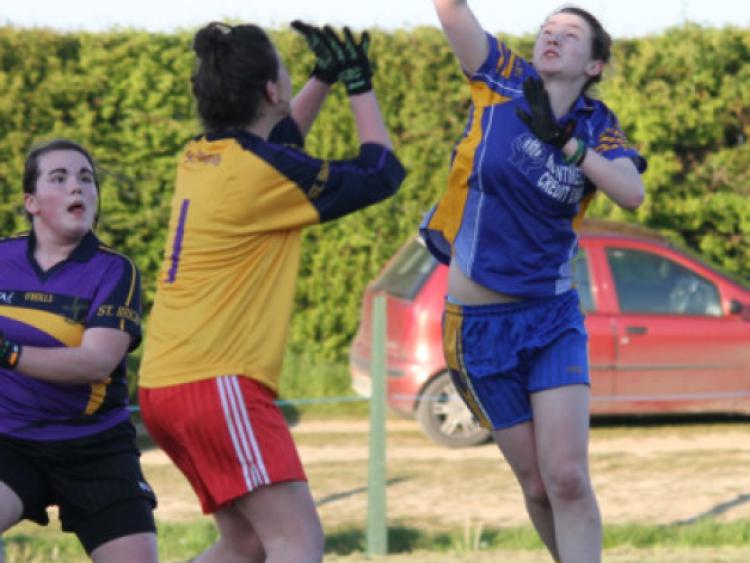 Sarsfields brushed aside the challenge of St Brigid’s as they picked up their second set of points in of this Laois Ladies Senior Football championship Round 2 game in Ballylinan on Friday.

Sarsfields brushed aside the challenge of St Brigid’s as they picked up their second set of points in of this Laois Ladies Senior Football championship Round 2 game in Ballylinan on Friday.

The corresponding game in Mountmellick last year produced a rousing contest which went right down to wire; this time however the writing was on the wall for the hosts from an early stage.

St Brigid’s cause was not helped by the loss, through injury, of Kelly Farrell after two minutes and the unavailability of the Miller sisters, Anna Moore, Tara Farrell and Alice Malone.

St Brigid’s had the best of the opening exchanges, during which Chloe Ryan and Niamh Power narrowly missed the target, but on five minutes Sarsfields’ outstanding centre forward Laura Marie Maher found the net, after a 50 metre solo run, to set the tone for the remainder of the match.

Two excellent points from Niamh Power were quickly countered by Sarsfields as Ciara Burke and Meaghan Dunne found the net at the other end. Deirdre O’Shea and Chloe Ryan continued to torment the Sarsfields defence but had to settle for points.

Further goals from Maher and Dunne and points from Tracey Lawlor, Louise Bergin, Burke and the elusive Maher pushed the Mountmellick side into a commanding 5-6 to 0-5 half time lead.

The first few minutes of the second half proved to be St Brigids best period when some excellent work by midfielders Danny Callanan and Ashling Hayden provided the platform for a well taken Niamh Power goal and a point from O’Shea. Unfortunately for the home side that was as good as it got.

For the rest of the game Sarsfields moved into cruise control as their defence, showing few weaknesses and ably led by Emma McEvoy and Siobhan Fitzpatrick, closed down the shutters and frustrated any further St Brigids attempts to score.

Despite the best efforts of Jane Moore, Maeve Phelan, Denise Mulhare and Amy Potts in the Brigids backline Sarsfields attacked relentlessly and chalked up thirteen points on the trot to run out comfortable winners by 5-19 to 1-6.